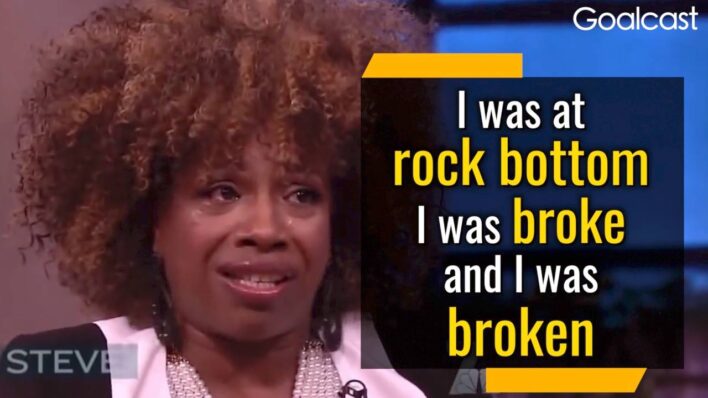 Lisa Nichols – Rescue Yourself Lisa Nichols reveals a moving story about her struggle and how she turned her life
By Goalcast    July 31, 2017

Lisa Nichols reveals a moving story about her struggle and how she turned her life around with less than 12 dollars in her bank account.

Lisa Nichols: I was at rock bottom. I was broke and I was broken. I got fired from five different jobs.

Lisa Nichols: Then I got pregnant with my son unexpectedly. Then at eight months, my son’s father went to prison.

When my son was eight months old, I went to the ATM to get $20 out the bank because I didn’t have Pampers for him. In order to get $20 out, you got to have $20 in. I had $11.42. I still can’t tell the story without getting emotional because it’s my story.

For two days, I had to wrap my son in a towel. But something happened, Steven, those two days. My son, laying on his back at eight months, I have a towel over him, and I have my hand on his stomach saying, “Don’t you worry, Jaylani. Mommy will never be this broke again.”

Lisa Nichols: As an African American male child in south central Los Angeles with a single mother whose father’s in prison, he had a 66% chance of going to prison himself. Not on my watch. Not on my watch. So, if I have to be willing to drastically transform myself so that I can become the woman that I know I can be.

Lisa Nichols: That’s what I began to do. I was radical. See, my grandmother said that conviction and comfort don’t live in the same block. If you’re going to be convicted about something, you might have to go through some discomfort. But if you want to stay comfortable, why don’t you just relax where you are? Because that’s where you’re going to stay.

At some point, I have to stop asking, “Can I be great? Can I be brilliant? Can I be okay and still be accepted?” I just stopped asking permission and just gave notice unapologetically. Not in a braggadocios way. Not in a way that shrunk anyone else. In a way that said, “I only got one life and I’m going to ride this one until the wheels fall off.” That was the beginning of me rescuing myself. I realized that I am my rescue. No one else is my rescue. I am my rescue.