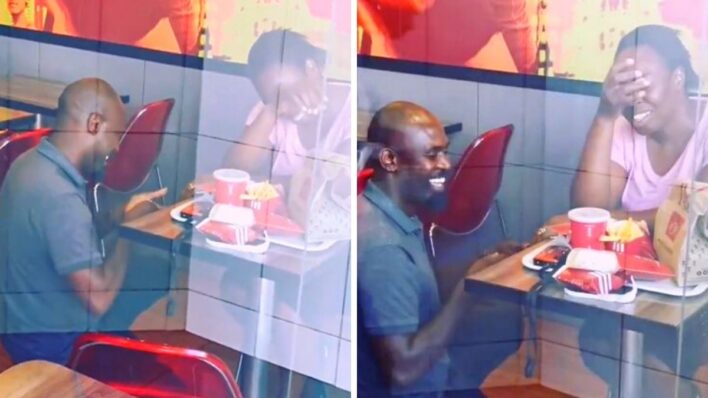 A South African couple never expected the outpouring of support they got from the internet after his proposal was caught on video.
By Joel Balsam    November 8, 2021

A South African couple never expected the outpouring of support they got from the internet after his proposal was caught on video.

South African couple Hector Mkansi and Nonhlanhla Soldaat met at a funeral in 2010 and got married in 2012—but it wasn’t the wedding of their dreams.

“In 2011 our families began lobola negotiations (dowry) and in 2012 we got married in a small traditional ceremony as that was all we could afford at the time,” Mkansi told CNN. “We had the ceremony but I knew this wasn’t what my wife and I wanted.”

So Mkansi, a pastor, decided to buy his wife new rings and stage a proposal at their favorite place to eat, Kentucky Fried Chicken.

“The team at the restaurant was surprised at the request but they were helpful in creating the big moment. We received our meals and when she looked inside, she found the rings and that’s when I went down on my knee,” he said.

The proposal was caught on video and went viral online.

At first, people mocked the proposal, but positivity quickly shone through.

Gifts started raining down on the couple from various brands to celebrate their marriage. They were offered lifts on their honeymoon by Audi and Uber, furniture for their home, and even diamond rings.

“Honestly speaking, I never thought this would happen to us. We have been thought a lot—and I never thought God would bless us in front of the whole of South Africa—especially not at KFC,” Soldaat told TimesLIVE.

“I had a dream of getting married and walking on ice, with mirrored glass under my feet, where I can see myself. Today, that seems like it is possible for me, because of the love from my fellow South Africans.”

The wedding of their dreams

On New Year’s Eve 2019, the couple finally got married—and it was, in fact, the wedding of their dreams.

“We are still in disbelief, both of us have to ask each other if this is really happening from time to time. We couldn’t be more grateful to God and every single person that has shared in our little love story,” Mkansi told CNN.

“Our dream has come true, we never in a million years thought something like this would happen to us.”

Wedding proposals tend to get shared online—but ultimately, they’re a very personal thing. One couple’s proposal on a mountain is another’s proposal in a fast-food chain. Ultimately, whatever makes them happy—and comfortable enough to say ‘yes’—is what matters most.

The reaction to this couple’s story yet again proves the kindness of strangers, and that celebrations of love can take many forms.