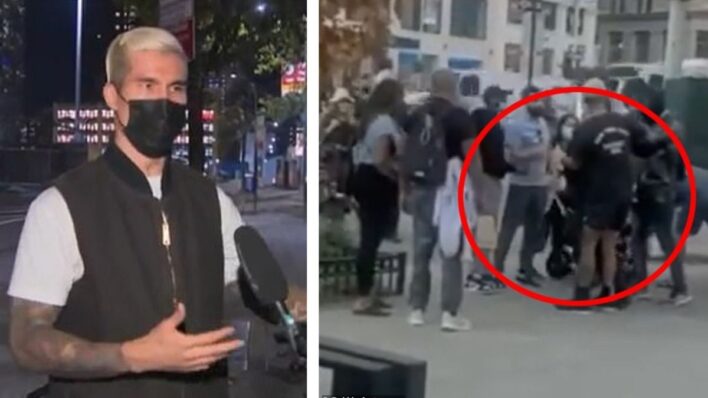 In a scene straight out of a UFC event, one brave park-goer used his martial arts skills to save a
By Bryan Liquor    April 14, 2021

In a scene straight out of a UFC event, one brave park-goer used his martial arts skills to save a mother’s infant from an attack.

Panic at the park

Brain Kemsley was walking with his girlfriend at Madison Square Park in Manhattan when he noticed a commotion.

A man was attempting to take a woman’s baby stroller. The mother — who was also holding another infant — pleaded with the man to stop, however he continued trying to take the child.

“He was saying things like, ‘How do you know it’s her baby, this could be my baby,'” recalled Kemsley to PIX11.

He swung into action

As the struggle escalated, Kemsley swung into action. Footage captured him using his martial arts skills to bring the man to the ground as park-goers screamed in the background.

“I took him down and I held him. I pinned him so he couldn’t move…Clearly this guy, we couldn’t just let him go”

Several strangers rushed to assist Kemsley in pinning the man down until authorities arrived.

Rangers showed up 15 minutes later to take the attacker away.

“As the situation escalated…it became pretty clear that he had mental issues. Someone else actually came and took him to the hospital,” Kemsley added.

Do what is needed

Kemsley credits his years of martial arts training with empowering him to save the day.

“The limited Jiu-Jitsu I learned over six years ago allowed me to control a strong raging full-grown man like he was a baby,” he said per the Daily Mail.

However, he doesn’t seek any credit for simply doing what was necessary.

“It’s not a matter of stepping in, it’s a matter of duty when you see a woman and her child screaming”

Kemsley could have easily walked by that day, telling himself that the scuffle was none of his business. Or, he could have taken out his cell phone to capture the next viral video.

Instead, he chose a third option: action.

He realized that his Jiu-Jitsu skills gave him not just the ability but responsibility to do something.

Despite the great risk, he intervened and helped avert who knows what awful outcome.

While most of us aren’t martial arts masters, we can all tell when something’s not right. And whether it’s calling out or calling for help, we all have a heroic act to play.

Keep that in mind the next time you might think a situation is too big or small for you to get involved.