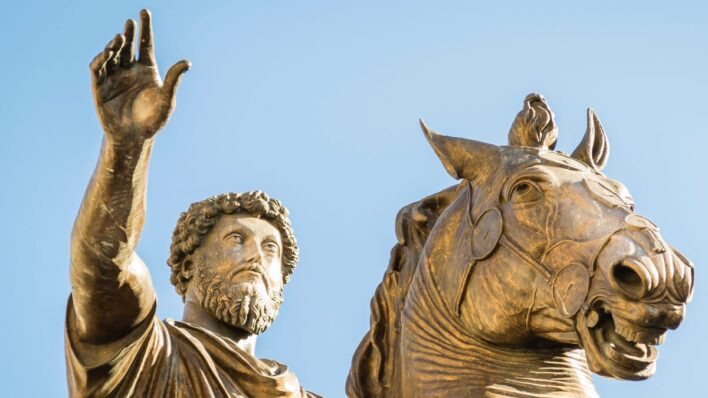 Here Are Some Key Lessons From Marcus Aurelius’s Meditations

Meditations has the power to teach you new things on every read.
By Bashir Jones    April 13, 2022

Meditations has the power to teach you new things on every read.

Marcus Aurelius is known as the last of the Five Good Emperors of the Roman Empire. His rule lasted from 161 CE – 180 CE and in that time he was, and still is one of the most powerful men to have ever existed.

However it’s more than just the title and role bestowed upon him at birth that has cemented Aurelius’ name in the history books forever. It was his approach to life and collected thoughts that would be his legacy.

Each night, Aurelius would write in his journal, thoughts of philosophy, love, change and death. A multitude of universes playing through the mind one of the most powerful leaders in history. This journal, originally titled Ta eis heauton (which roughly translates to To Himself) would later be reformatted as a book called Meditations.

Meditations would go on to become a foremost resource on the practice and lifestyle of stoicism of which Marcus Aurelius himself was a student and eventual master.

The practice of stoicism, (developed in 3rd Century BCE by Zeno of Citium, in Athens) teaches us the development of self-control and fortitude as a means of overcoming destructive emotions. The philosophy holds that becoming a clear and unbiased thinker allows one to understand the universal reason or logos. Stoicism’s primary tenet revolves around the idea of improving the individual’s ethical and moral well-being.

Stoicism is all about being open and unbothered by the world around you. It doesn’t mean you have to bury your emotions and face life with a stone-cold gaze, but that you can accept, acknowledge and work through those emotions without severe turmoil. It’s to be okay with destiny as it unfolds around you, and accepting of the fact that anything for you, will never miss you.

Aurelius was one of the foremost students of stoicism and his journal, Meditations, is still a favorite resource for readers all over the world today.

Train your perceptions: “You have power over your mind – not outside events. Realize this, and you will find strength,” Aurelius explains. Marcus knew that the reality of how your life unfolds is in the way you perceive it to be. Whether or not you are accepting of your situation, and are able to find the positives is the strongest determiner of your happiness and self-control.

Understanding also, what is and is not in your control is a key facet to perfecting our perceptive self. Unbothered and accepting of those actions we have no control over allows us to focus on what we can control. To put energy forth into things that truly matter and can have a benefit to our lives over things that are simply a waste of time.

Some characteristics of a perceptive soul include self-perception, self-examination, and the power to make of itself whatever it wants. Believe in yourself and your ability to rectify life’s hardest battles. That means you are ready and willing to work through anything life throws at you with controlled and emboldened emotions.

Forgiveness as a daily practice: “God did not intend my happiness to rest with someone else,” said Marcus Aurelius. He knew that at the forefront of happiness was letting go. It’s important to be able to turn the other cheek and be mature enough to forgive people, even and especially when they are totally in the wrong.

During stressful times in life, we hope our people and community are there for us. When they aren’t, it can be another reason to feel hopeless and insecure. However, forgiveness to everyone else just going through life, as well as acceptance that our happiness and security lies within the power of our own hands are key characteristics to the values of stoicism.

Be obsessed with your own destiny: this simple idea has the power and potential to change your life if you really believe in it. The idea behind obsession of our own destinies lies in the internal self-belief that you are meant for something, and it, in turn, is meant for you. In no world can you miss it, or it miss you.

You are here for a reason, and destiny will carry you towards that reason eternally and forever. It allows us to accept all that is happening around us and see the bigger picture in life. This in turn allows you to build a strong and powerful emotional foundation that will lead you to achieve all that you dream of.

Meditations is filled with incalculable tidbits of information that will help you better your life and understanding of the world around you. It teaches different things to different people, and has the power to teach you new things on every read. For anyone trying to gain control of their world, perceptions and emotional responses, it should be high on their list. Yet how can we apply his lessons to our everyday schedules?

Having a built-in mindset when it comes to growth is one of the most important deciding factors on whether you will succeed at building new habits or not. A built-in approach asks one simple question: are you making this habit easy to implement within your world or not?

If the answer is no, it’s unlikely that you’ll ever truly be able to take on that habit. We must make habits easy and natural to our days and movements. That can mean you find time to exercise on your daily commute to work, or listen to your language podcast every time you’re cooking.

In terms of stoicism, and lessons from Meditations, that means we must take the time to reflect and look back on our days, and so our lives any chance we get. A core tenet of Marcus Aurelius’s ideology was that he would journal every single day. Doing so allowed him to study himself and the world around him.

By journaling, meditating and pondering on the lessons you find in this book, or anywhere else for that matter, you will be able to notice the discrepancies between the person you are and the person you want to be. Giving yourself the space and time to reflect on such matters are keys to achieving internal peace, and emotional equilibrium.