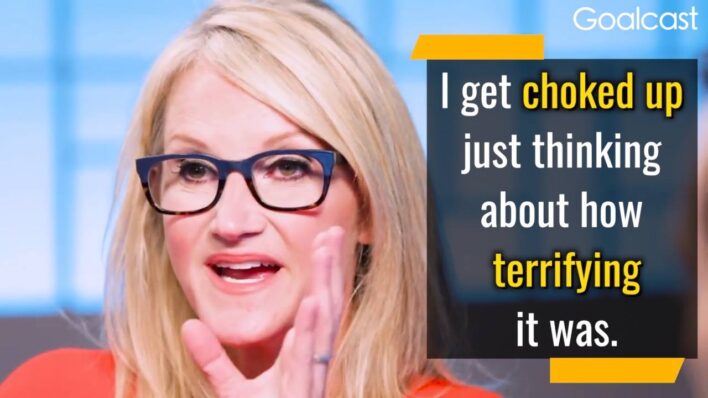 Mel Robbins – Outsmart Your Brain Mel Robbins opens up about her failures to Tom Bilyeu on Impact Theory, she
By Goalcast    July 24, 2017

Mel Robbins opens up about her failures to Tom Bilyeu on Impact Theory, she also speaks about how she launched herself out of self-doubt and started winning at life again.

In the scheme of life, hitting the snooze button is not that big of a deal. But here’s the thing about life. None of us wake up and say, “Today is the day I destroy my life.”

And I was about to turn off the TV, and there on the TV there was this rocket launching, and I thought, “Oh my Gosh. That is it. I am gonna launch myself out of bed like a rocket ship, like NASA, right here, had launched me out of that bed. And I’m gonna move so fast that I don’t think. I’mma beat my brain.”

The next morning the alarm goes off and I pretended NASA was there. It’s the stupidest … I literally went, “Five, four, three, two, one.” I counted out loud, and then I stood up. And I’ll never forget standing there in my bedroom. It was dark, it was cold, it was winter in Boston. And for the first time in three months, I had beaten my habit of hitting the snooze button. I couldn’t believe it. And I thought, “Wait a minute. Counting backwards? That is the dumbest thing I’ve ever heard in my entire life.”

Because I went from getting up on time, and waking up on time, to shaking up my entire life. Because when you understand the power of a five-second decision, and you understand that you always have a choice to go from autopilot to decision maker, everything in your life will change. You will be a different negotiator. You will be different in sales. You will be unstoppable in the gym, because you will realize the amount of garbage that you put in the way of your hopes, of your dreams, of your potential, of your confidence, of your courage. Everything comes down to the decisions that you make.

We all know what to do. None of us know how to make ourselves do it. So the single most profound use of the five second rule is mind control. You can actually use one stupid little trick to push yourself to grab it. I wanted to change my life. And I think most people that are miserable, or that are really dying to be great and dying to have more, we wanna change. We wanna live a better life, we wanna create more for our families, we wanna be happier. The desire is there. It’s your job to push yourself. You can outsmart your own brain in furtherance of goals.

Speaker 1: There are tricks that you can use that actually outsmart the tricks your brain plays on you. In furtherance of a higher purpose.