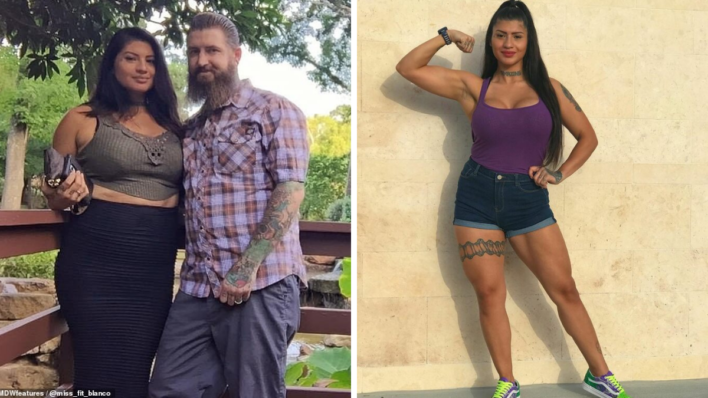 A car accident changed a Texas woman’s life, influencing her to exercise and live a healthier lifestyle — all while
By Joel Balsam    June 18, 2021

A car accident changed a Texas woman’s life, influencing her to exercise and live a healthier lifestyle — all while proving her critical ex-boyfriend wrong.

She was very hard on herself

“I had an ex that would always tell me no one wants to end up with someone fat and that I was lucky he was even sticking around. I remember that stuck with me for a long time — sometimes it still gets to me. After he left, I was a depressed single mother of two,” she told The Daily Mail.

Blanco eventually left her ex, raising her two eldest children on her own until she met Jordan, her current husband. But she still remembers feeling down.

“I hated how I looked. I had very low self-esteem. I used to tell my husband if he left me for another woman I wouldn’t be angry because I knew he could do better than me,” she said.

A scary car accident left her with back pain

But then something happened that changed Blanco’s life.

She was driving when a truck T-boned her vehicle. She left the scene with a herniated disc and severe back pain. Doctors told her that she has two options: surgery with a 50/50 chance of success, or to live off of pain meds.

“At the time my girls were young. My two youngest were about two and four. Relying on pain meds was not an option,” she told The Daily Mail.

So her husband had a suggestion: try working out and strengthening her back.

“We signed me up to a gym. I was a bit self-conscious because everyone at the gym was beautiful to me. My husband said everyone is here for the same reason as you are. Everyone wants to be a better version of themselves and that’s how it all started for me,” she said.

She started training her body and mind

Blanco started to love working out and even hit the gym after 12-hour shifts.

She also changed her diet, making sure to get enough protein, carbs, and fats — but she still says she eats pizza, burgers, fries, and pancakes.

“Losing weight has changed my life a lot. It’s given me knowledge on making sure my kids also eat healthy, so they don’t have health issues when they get older,’ she told The Daily Mail.

Blanco says she still struggles with negative self-talk, but now that she’s been working on training her body she also wants to train her mind to be more positive.

What’s helped is seeing other people’s transformations and how much she’s inspired others.

“I’ve always wanted to be the face for mothers all around the world and show them having stretch marks can still be sexy. That’s the reason why I keep working hard,” she said. “I actually get a lot of positive messages from men. They actually tell me that they show their wives my picture to show them, ‘Hey, she can do it, you can too.”

Blanco’s advice is that “if you want this bad you’ll do anything to get it,” she said.

“Stop listening to others and get your s*** together and work your ass off and stop giving a s*** what anyone else has to say. You are doing it for you not for others.”

Be kind to yourself

Criticism about how you look can come from all kinds of sources, whether it’s an ex-boyfriend, family, negative representations in the media ec. But the worst criticism is when it comes from within.

If you’re down on yourself, it’ll likely cause you to eat more as a coping mechanism, and then you’ll gain more weight and the vicious cycle continues. That’s why it’s so key to be kind and uplifting to yourself, as Blanco has learned. Her transformation proves that a transformation is possible if you want it badly enough — but also that no one should ever treat anyone like her ex treated her.