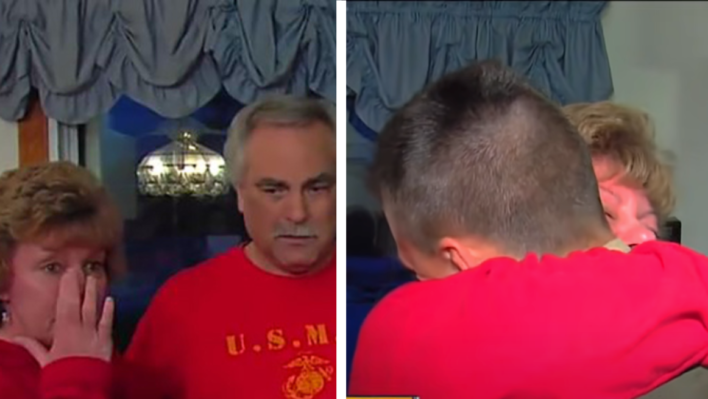 How one sister and a local news crew came together for a Christmas none involved will ever forget.
By Carl Wordsworth    December 26, 2022

How one sister and a local news crew came together for a Christmas none involved will ever forget.

The holidays are a time that many families enjoy each other’s company. The Martin family were no exception–but for the first time, with their son Shane enlisted in the Marines, they were expecting to be minus one family member around the table at Christmas.

While they had all prepared emotionally for a holiday without Shane, one of their daughters had a secret planned, and brought in a local news station to help with the surprise.

When  Detroit WXYZ news sent a live correspondent to the Martin family home, they thought they were simply featuring in a news piece on families with children in the military. They gathered sombrely in front of the camera, describing their experiences of having a son and brother in the Marines, and how they felt about his absence.

The father detailed his conflicted pride, clearly grateful for his son’s service while also feeling the absence of his youngest during the Holidays. Shane’s mother was also visibly emotional, admitting to the camera how difficult this holiday season was on her. Shane has three other siblings, and they all proudly donned US Marine Corps attire. One, however, had a trick up her sleeve. While the entire family stood in front of the camera speaking with a news correspondent, she had arranged for Shane to surprise the family and capture the moment. Shane had even gone so far as to send flowers to the family to express his condolence at missing the holidays.

After interviewing the family, the news correspondent told the family to sit tight for just a second, as they had a surprise planned for them. After a few uneasy moments of waiting, Shane Martin walked through the front door and shocked his family. The beautiful moment was all captured, and can be seen here.

As soon as Shane walked through the door, his mother rushed to embrace him, clearly in disbelief. Moments earlier, she told cameras how Shane is her baby, the youngest of his siblings, and her love for him is abundantly clear in her reaction. He then greets his father, who welcomes him home in a voice heavy with emotion. Shane’s meeting with his brother is especially poignant, as the correspondent points out that the two were born a year apart to the day, and are often mistaken for twins. They clutch each other, both overcome with emotion.

The story of the Martin family is not necessarily one every family can relate to in detail, but the love of a brother, or a son, transcends. The video has racked up over a million views on the news’ Youtube channel, and the comment section is filled with an outpouring of love. For example, one comment left reads simply “That whole story had me in tears.”

READ MORE: Costco Employee Found a Child’s Unique Christmas Wish List and Decided to Buy Every Single Thing on There