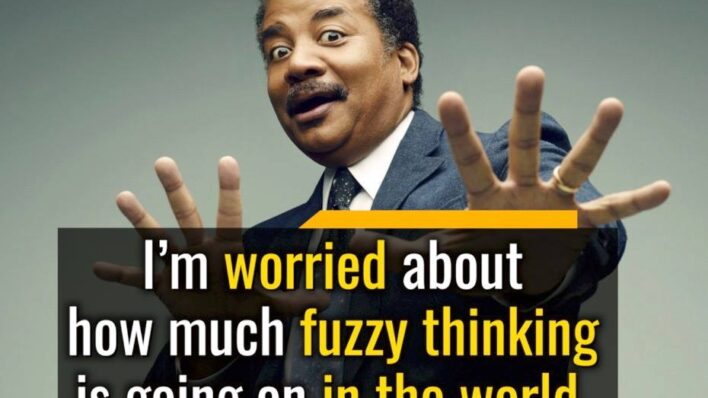 Neil deGrasse Tyson: Who I Would Hire

Neil deGrasse Tyson: Use your Mind

Neil deGrasse Tyson gives a simplistic example to showcase the flaws in our educational system and explains his decision process when hiring a candidate.

I’m worried, really, about how much the fuzzy thinking is going on in the world. Fuzzy thinking … people just not thinking straight. Consider this following example: imagine you have a spelling bee. This is contrived, but it makes the point. There’s a spelling bee, and you have to spell the word “cat.” Okay. So one student spells it C-A-T. Person got it right! The next person spells it K-A-T. That’s wrong! You got that wrong! Okay? Third person spells it X-Q-W. Do you realize that is marked equally as wrong with the K-A-T? When you could argue that K-A-T is a better spelling for “cat” than C-A-T! Dictionaries know this, because that’s how they spell it phonetically! And so we’ve built a system for ourselves where there’s an answer and everything else is not the answer, even when some answers are better than others. So our brains are absent the wiring capable of coming up with an original thought.

If you’re an employer, and two candidates come up looking for a job … and this is, again, a contrived example … and you’re interviewing the two candidates, and you say, “For part of this interview, I just want to ask you what’s the height of the spire on this building that we’re in?” And the candidate says, “Oh, I was a architect. I’ve majored in architecture for a while, and I memorized the heights of all the buildings on campus. I know. The height of that spire is 150 feet. In fact, 155 feet tall.” Okay, turns out that’s the right answer. That’s the right answer, and person came up with it (snaps fingers) in seconds.

That person goes away, the next candidate walks in. “Do you know the height of the spire on this building.” The candidate says, “No, but I’ll be right back.” Person runs outside, measures the length of the shadow of that spire on the ground. Measures the length of her own shadow, ratios the height to the shadows, comes up with a number. Runs back inside. “It’s about 150 feet.” Who are you gonna hire?

You realize when you know how to think, it empowers you far beyond those who know only what to think.