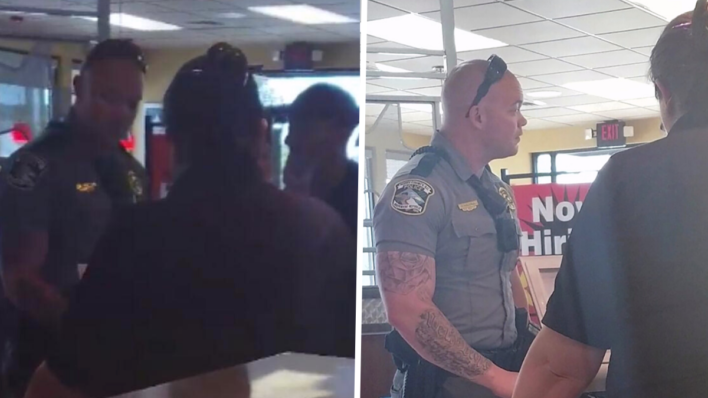 One homeless man’s run-in with law enforcement went viral, but for all the right reasons.
By Bryan Liquor    January 21, 2022

One homeless man’s run-in with law enforcement went viral, but for all the right reasons.

It’s not a stretch to say that danger lurks whenever a police officer responds to a call. So when dispatch alerted Officer CJ Mullinax of Horry County, South Carolina to a Hardee’s fast-food joint near highway 17, he was on guard.

However, the “emergency” wasn’t a robbery or fight, rather a homeless man “asking for scraps.”

Many responding officers would probably roll their eyes and escort the vagrant out so they can get on with their day. However, Mullinax took a different approach.

Arriving at the restaurant, Mullinax greeted the man, looked at him and asked whether he was hungry while pointing at the menu with a grin. As the man nodded, Mullinax pulled out his wallet and bought him a hot meal.

Mullinax found out from employees that they had taken a shine to the man and had fed him on several occasions. It was likely a grumpy customer who placed the call to police.

“This police officer bought the homeless man food and handled the situation amazingly!” she said, adding that he bought the man two cheeseburgers. That’s when she knew she couldn’t just be a bystander, but a biographer.

I was thrilled that the officer had so much compassion so I thought I should take a video.

The video quickly caught fire, amassing over 90,000 views and scores of awestruck comments.

“Nice to read such a good story! Kudos to the officer!” one Facebook user commented.

“People forget that the police are there to not only protect but also to serve,” added another.

He had nowhere to go

One local resident would later identify the homeless man as a veteran named Donald, adding that he had fallen on some truly tough times.

“He served in the Army from 1978-1981 then got out, worked in construction and then hit a wall which brought him to a point in his life that walked him down the road to homelessness….his family doesn’t talk to him and he’s the nicest guy,” the local said.

Another resident said that Donald “is a humble guy who can take a tear and turn it into a smile” while encouraging residents to strike up a conversation with him sometime.

It turns out that this wasn’t Mullinax’s first viral act of kindness. As a Bennettsville Police Officer, he was caught on camera playing pickup football with a group of neighbourhood kids. His words then ring just as true now.

That’s how you gain the community’s trust.

In a time where communities- even families- are so fractured, Mullinax reminds us that the remedy isn’t big acts with bright lights, but small gestures from everyday folk like us to move the world forward.