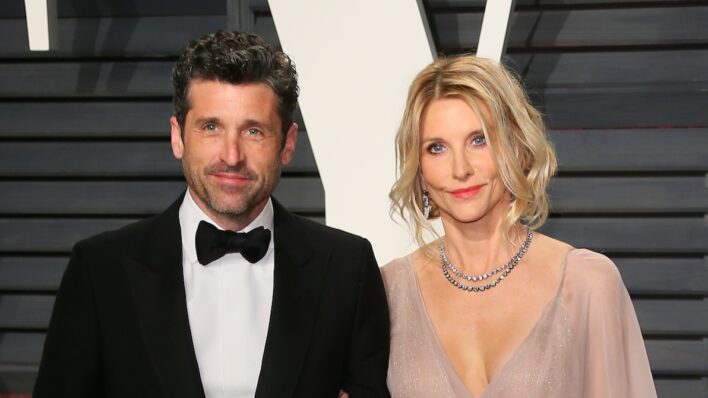 Patrick Dempsey and Jillian Fink have enjoyed over two decades of marriage and, upon first glance, their relationship appears to
By Barbara Pavone    February 12, 2021

Patrick Dempsey and Jillian Fink have enjoyed over two decades of marriage and, upon first glance, their relationship appears to be pretty perfect. Scroll through their Instagram feeds and you’ll see plenty of sweet professions of love, like a 2018 post from the Grey’s Anatomy star that shows him and Fink kissing in front of the very same gazebo where they tied the knot in 1999. “This spot 19 years ago, today!” he gushed.

However, despite appearances, the couple almost called it quits in 2015. In fact, they went as far as to file for divorce. That’s when they realized they weren’t ready to give up on the life they had built together and by putting in some serious work, they brought their relationship back on track.

Here’s what we can learn from Patrick Dempsey and Jillian Fink’s impressive marriage rescue:

Patrick Dempsey and Jillian Fink first met in 1994 when the actor made a haircut appointment at Fink’s L.A. hair salon, Delux. Speaking with People in 2002, Fink recalled seeing the name “Patrick Dempsey” in her appointment book and thinking it was a joke. Then the Fast Times actor walked through the door. “I was shocked,” she admitted. “But at the same time, I was happy because he was so cute.”

What ensued were “three years of occasional haircuts and harmless banter” because the timing simply wasn’t right. While Fink was dating someone, Dempsey was working through the end of an allegedly “nightmarish first marriage” to his manager, Rocky Parker, who was 26 years his senior when they married in 1987.

It wasn’t until 1997, when a mutual friend told the actor that Fink had become single, that they began dating. A whirlwind romance followed, as the celebrity hairstylist and makeup artist moved in with Dempsey after just three months of dating and they said “I do” in 1999. The ceremony, which took place at a Maine farmhouse owned by Dempsey’s family, was a tearjerker, according to the bride’s sister, Kristen Mason. As she recalled, the moment Dempsey saw Fink walking down the aisle, he “started crying.”

The pair grew their family in February 2002 with the arrival of daughter Tallula Fyfe, then twin boys Sullivan Patrick and Darby Galen followed in February 2007. Getting candid about fatherhood, Dempsey sang its praises, telling People, “I’m constantly amazed by their insight and their observations. It’s fascinating and fun to come up with answers to their questions, and the questions are getting harder!”

It’s easy to assume that a strong, blissful union will simply sustain itself, but that’s not the case. A successful partnership requires work — and not just every once in a while. No, it takes constant effort from both sides to succeed in the long run.

Patrick Dempsey and Jillian Fink learned this truth first-hand. In January 2015, they were ready to call it quits with Fink filing for divorce and the couple telling the media (via TMZ), “It is with careful consideration and mutual respect that we have decided to end our marriage. Our primary concern remains the well-being of our children, and we ask with profound gratitude that you respect our family’s privacy at this very sensitive time,” they said in a joint statement.

But jump to November 2015 and the supposed exes were spotted holding hands in Paris, sparking rumors of a reconciliation. Something Dempsey confirmed in May 2016. When the Evening Standard asked if he and Fink had reconciled, he said, “Yeah, I think so” and revealed that it was realizing that “you have to work at everything” that saved their marriage. Speaking with People, he further explained, “Our marriage was not something I was prepared to let go of. I didn’t feel like we had done all the work. And we both wanted to do that work. That’s where it started.”

Calling a potential divorce “scary,” he admitted, “It’s always destabilizing when you’re potentially breaking up a family or you have a big section of your life that’s ending.” Faced with that realization, he and Fink decided “it was time to work on our issues and improve,” so they turned to couples counseling, which the actor calls “very important.” What’s more, they “wanted to be role models for our kids like, okay, if you have differences, you can work them out.”

The pair’s efforts paid off. Come November 2016, Fink filed to have their divorce papers dismissed and a judge granted the request soon after, officially calling off their pending separation.

The world may know Patrick Dempsey for his various acting roles, but back in 2004, he set his sights on another passion — racing — and built quite the accomplished career, even starting his own team, Dempsey-Proton Racing. But as he told the Evening Standard in 2016, the reconciliation with Fink was made possible by the realization that “you cannot do everything” and that “something has to be sacrificed.” That something ended up being racing.

In 2016, Dempsey announced that following his full season in 2015, he was stepping back because “time goes by so quickly with my kids that I don’t want to miss that.” In an official statement, he added that his “motorsports journey has been a rewarding one,” but that “at this point in my life, after an amazing season thanks to my friends at Porsche and TAG Heuer, I need to take a step back and focus on both my family and my acting career.”

Speaking of the importance of reshuffling his priorities and putting his marriage first, Dempsey told People, “You can only do one thing at a time and do it well. I [learned] to prioritize. Our union has to be the priority. I wasn’t prepared to give up on her and she wasn’t either,” he told the mag, adding that their marriage is “much healthier” now.

Dempsey also admitted that he “always struggled with the question of sacrifice” and it was during his time apart from Fink, which “was really a time of introspection,” that he realized the importance of putting family first.

I became frustrated with the lack of quality of experience in my life. I wanted to get to that deeper level, and not just skirt the surface.

Despite their successful reconciliation, the work hasn’t stopped. “You’ve got to keep at it,” Dempsey told People. “You’ve got to communicate, and stay open and not get lazy. And not give up. And lots of sex!” he laughed. Another key to success? “Getting quality time together.” Speaking with ET, the actor stressed the importance of making time for each other, away from the kids. “Couples have to figure [out how] to get date nights. That is what it is about.”

There is no such thing as an easy relationship. It takes a lot of work to make something appear effortless and the same can be said about marriage. What Patrick Dempsey and Jillian Fink learned (and what they can teach us) is that a successful union requires constant communication and plenty of work. But if you’re willing to put in the time, you will always be rewarded.