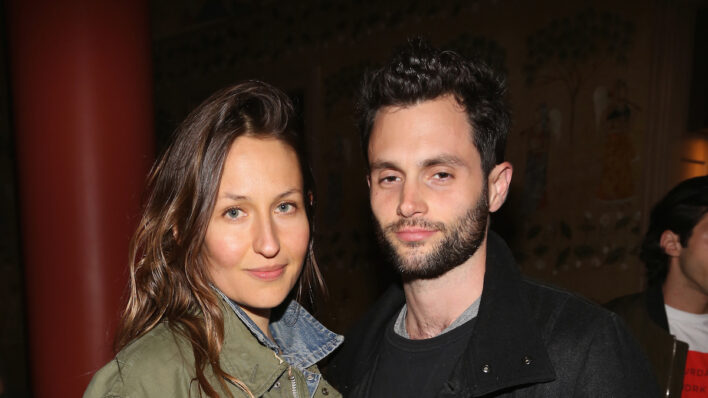 Who Is Penn Badgley’s Wife? A Look Inside His Sweet Relationship With Domino Kirke

Penn Badgley skyrocketed to fame thanks to his role as Dan Humphrey in Gossip Girl, but being thrust into the spotlight had its challenges.
By Barbara Pavone    February 19, 2021

Penn Badgley skyrocketed to fame thanks to his role as Dan Humphrey in Gossip Girl, but being thrust into the spotlight had its challenges.

Penn Badgley skyrocketed to fame thanks to his role as Dan Humphrey in Gossip Girl, but being thrust into the spotlight had its challenges. While the Maryland native’s career took off, he was keeping a number of pretty major secrets.

For one, he began dating co-star Blake Lively, which should have been a happy development, except they had to keep their romance under wraps. “I remember there was one point where we were just afraid of how our personal lives overlapping our work life could be perceived by our bosses,” Lively later told Vanity Fair. At the same time, Badgley was doing “plenty of research” with drugs and, according to executive producer Joshua Safran, he “didn’t like being on Gossip Girl.”

Opening up about the realities of fame, Badgley told People in 2018, “I’m really grateful for [the notoriety], but also, you struggle with things. The phenomenon of fame is literally invisible, but it influences and dominates your life if you aren’t careful,” he noted. “Learning how to accept it and accept that lots of people think they know me is ultimately what led me to seek out such a spiritual perspective.”

That spiritual perspective came from the Bahá’í faith, which the young actor devoted himself to studying once the show wrapped in 2012. In addition to helping him come to terms with fame, it was also critical in helping him forge the relationship he was meant to be in. So who is Penn Badgley’s wife and what can we learn from their sweet union? Let’s take a closer look.

Who Is Domino Kirke?

Domino Kirke and Penn Badgley have a lot in common, including creating music (she with DOMINO and he with MOTHXR). When their relationship was first confirmed back in July 2014, a source told Us Weekly how, in addition to having “a number of mutual friends,” the couple bonded over music. Calling it “a very mature and free relationship,” the insider said, “Domino is a great girl for him, being a musician. Their interests align.”

In fact, Domino Kirke studied piano and classical voice, and comes from quite the artistic family. She was born in London, England to interior designer Lorraine Kirke and drummer Simon Kirke (who has played with Free and Bad Company). You may also recognize her sisters: Girls star Jemima Kirke and Mozart in the Jungle actress Lola Kirke.

Recalling her childhood in an interview with W, Kirke noted how music was always around her and soon, she was giving it a go. “We moved so much, but in every house we ever had, there was always a piano,” she told the mag. What’s more, “there was always music and always musicians in and out,” which inspired her to start writing and, by age 17, she was playing gigs around NYC. Her band, DOMINO, eventually went on tour with Lily Allen, but then, just as she was busy recording music with Mark Ronson, she learned she was pregnant. Her son, Cassius Riley, was born in 2009 and the budding artist decided to step back from music to focus on her son. It wasn’t until years later that Kirke returned to the studio and released her debut solo album, Beyond Waves, in 2017.

Kirke took to Instagram to announce her pregnancy with Penn Badgley and said, “Pregnancy after loss is a whole other thing. After two miscarriages in a row we were ready to call it. I stopped trusting my body and started to accept the fact that I was done. As a birth attendant, I’ve seen and heard it all. It takes everything I’ve got to detach lovingly from the losses I’ve been present for and be in my own experience. When I was pregnant at 25, I knew nothing. I had no community. I dove in blissfully unaware about birth and its mysteries. Now, with 10 years worth of experience to pull from, I treasure my birth community and the knowledge I have. You’re already teaching us how to stay in the day in a way we’ve never had to, little one.”

Domino Kirke isn’t just a devoted mother and a talented musician — she’s also a successful businesswoman. After she gave birth to her second son Riley – which she refers to as “very traumatic” – Kirke decided to pursue her “secret wish to become a midwife.” In addition to becoming a doula, she founded Carriage House Birth in 2010, a collective which “aims to deepen the practices of doulas and provide birth and postpartum services for families at every stage of their reproductive journey.”

RELATED: What Chrissy Teigen’s Post About Pregnancy Tells Us About Moving Forward

Kirke’s celebrity clients include Amy Schumer who couldn’t help but sing her praises. “What do doulas do? I don’t totally know,” the comedian joked on Instagram. “But what [Domino] did was make me and Chris feel totally secure and supported throughout my pregnancy and the birth process.”

In related news, Schumer actually shared that she ended up firing Kirke after giving birth due to how vulnerable she felt and compared Kirke to a goddess, “She’s so like, just lovely and when she touches you just kind of melt. And she was really a family member. And I just felt so vulnerable, I was like, ‘I can’t have this Botticelli f–king goddess floating around my home when I am like, bleeding out.”

That growing baby bump, while precious, can be a source of anxiety for many, especially first time moms. Having someone experienced guide you through it can be of great help, and that’s the support Domino Kirke wishes to provide through her business.

Domino Kirke Wasn’t Sure About Penn Badgley At First

It can take time to realize the importance of a new person in your life and that was the case for Domino Kirke. Speaking with HeyMama, she admitted she didn’t take her relationship with Badgley seriously at first. “I was sort of getting used to being a single mom, maybe a little too used to it,” she said. “I had a really good thing with my kid and we were like this little team. Penn and I were dating, but it wasn’t nearly as serious as it is now,” she shared.

I didn’t think marriage was in the cards for us. So I was sort of just chugging along, surviving, and getting through the days.

She was wrong, of course. The couple said “I do” in February 2017 in what People dubbed “a small courthouse ceremony” in Brooklyn. That June, they had a second wedding at the Lake Waccabuc home owned by Kirke’s mom. As she told HeyMama, the nuptials changed everything. “I think the difference now is that I’m really living,” she gushed.

As for the importance of having that second wedding, Kirke explained, “My first wedding was more of a civil ceremony with about 40 people that [were] able to join us in a pinch. The second one was more planned. Two hundred people came from all over the world. It just felt necessary to have both.”

Years before Penn Badgley and Domino Kirke had their first child together, the actor seamlessly took on the role of stepdad to Kirke’s son, Cassius Riley. As Kirke told Us Weekly in October 2019, “He’s a really good stepdad. He doesn’t have to be ‘dad’ so he can have more fun with him. It’s really nice,” she enthused.

The stepparent thing is definitely uncharted territory for me ’cause I didn’t grow up with one, but he takes care of him really well.

In August 2020, their family grew with the arrival of a baby boy, but as Kirke revealed, their journey to parenthood wasn’t easy. Getting candid on Instagram (via E!), the musician admitted that “pregnancy after loss is a whole other thing.”

After two miscarriages in a row we were ready to call it. I stopped trusting my body and started to accept the fact that I was done.

Adding that the pregnancy was very different from her first — “When I was pregnant at 25, I knew nothing” — she concluded with a message to her future child, writing,  “You’re already teaching us how to stay in the day in a way we’ve never had to, little one. Thank you.”

These days, they’re a family of four and, just as she did when she had Cassius Riley, Domino Kirke is prioritizing her kids. Telling Us Weekly why that’s so important, she notes, “My sister [Jemima] says this in a very crass way as well, like, ‘If you’re thriving in your art, you’re definitely sucking as a parent. You can’t do both unless you have a full team. I don’t have a nanny. I’m a full-time parent. That’s my first thing. I’m a doula second.”

As Penn Badgley embraced the Bahá’í faith, he learned a lesson that would prove critical to building a lifelong relationship with Kirke. “I don’t think I could truly value human love until I developed divine love,” Penn told People in 2018. “[Domino and I] very much had a romantic beginning, and I think that you discover in marriage that what sustains a marriage for decades — there are less and less people who can tell us this — but I think it has something to do with [divine] love.”

Building on a foundation of shared passions, a love of family, and Badgley’s Bahá’í-driven revelations, Penn Badgley and Domino Kirke are in it for the long haul. And as the actor proved while celebrating his wife’s 36th birthday, they’re more in love than ever.

Taking to Instagram, the You star penned the sweetest message, writing: “A super-brief review of your invisible qualities: A truly radiant soul, you seem to spark alight almost everyone you meet, like a 99% success rate. You encourage others to be honest, and brave, and gentle, and expansive,” he continued. “Your great capacity for empathy is obvious, something anyone can get warm by like a glowing stove. Your desire to be of service to others is miraculous.” He concluded, “For me, it is a joy to witness you when you are happy. For you, I always hope to be a source of joy. I’m really glad we’re married.”