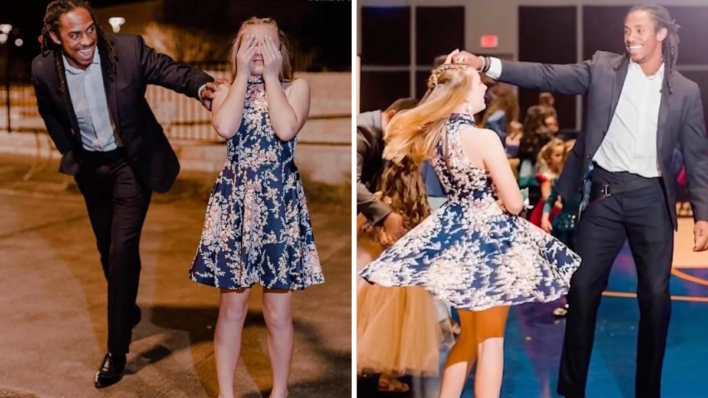 11-Year-Old Whose Father Died Unable to Attend Dad-Daughter Dance – Then, a Famous NFL Player Steps in

Football player, Anthony Harris, accompanied a little girl in Texas to her father-daughter dance after her own father passed away less than a year before.
By Lindsey Staub    April 1, 2022

Football player, Anthony Harris, accompanied a little girl in Texas to her father-daughter dance after her own father passed away less than a year before.

Eleven-year-old Audrey Soape always looked forward to the father-daughter dance at her local church in Pflugerville, Texas. Dressing up in heels and dancing with her dad among her friends was the highlight of her year. But after her father’s death, she didn’t know if she’d ever get to experience that night again.

In March 2021, Audrey’s father passed away in a tragic accident. Five weeks later, her grandfather, who would have stepped in as her date to the dance, also passed away.

“It was just a very tumultuous time for all of us. Very emotional,” Audrey’s mother Holly Soape told CBS News.

A lot of grief, a lot of sadness, a lot of anger. So anytime that I have the opportunity to bring joy or excitement into both my children’s lives, I absolutely jump at that moment.

The father-daughter dance was a tradition, something Audrey always got to do. While the rest of her life was completely upended, Holly knew Audrey still wanted this one thing.

“I knew with the dance coming up it would be an emotional thing. It would be a disappointing thing not being able to go. She brought it up a few times, saying she wished she could go,” Holly said. “She even at one point asked if I would escort her to the dance. I knew that if she was going to go, that I wanted it to be something really incredible. Something that would just make her feel special and would make her feel loved and important. So I tried to think of the coolest thing that I could come up with.”

That’s when Holly came up with a brilliant idea: The family had always been big fans of Anthony Harris, a football player for the Philadelphia Eagles, so Holly decided to ask him to escort her daughter to the dance.

I knew it was a long-shot. I didn’t really expect him to say yes. I was shocked and overjoyed when he said that he was going to do it.

This request was not the first time Holly had reached out to Anthony. Since March 2020, Holly has been messaging Anthony over Instagram to offer kind words of encouragement and prayers before big games or during career transitions. Holly also sent Anthony a message the day after her husband died, hoping for some comfort from her favorite player.

Anthony, who was raised by a single mother, wanted to support Holly and her family as much as he could. He promised that when the season was over, he would fly from his home in Florida to Texas to take Audrey to the father-daughter dance.

“I was like super surprised. Like, more than I can explain surprised. And I was also like, really nervous,” Audrey said. “Probably more nervous than excited at the beginning, because I didn’t know what I was going to say or do around him. As the night went on and time passed by, he felt more like my friend, and I could talk to him and open up to him more.”

Not only did Anthony take Audrey, but he also bought her a new dress and shoes and paid for her to get her hair and makeup done.

Holly went to the dance, too, after she signed up to be a chaperone at the event. She got to witness her daughter and her family’s favorite player tear it up on the dance floor.

He started engaging in conversations with her, like asking how her day was, asking about her dad, sort of making her laugh, and got her out on the dance floor. As the night progressed, he really went out of his way to just make sure she felt special, that she felt comfortable and that she was having a good time.

The feelings the dance created didn’t end that night.

“I think even days after, we were still sort of reeling from it. Like I would flip through the pictures I was like, ‘That actually happened. Like, he really came,’” Holly said. “They really had a great time. And just seeing the smile on her face, it was just incredible.”

The year was a difficult one for the Soapes, a time filled with a lot of grief and loss. But in the darkness, there were beautiful moments, too.

“It really kind of just changed the dialogue of the whole year. It was just this horrible, dark year that ended on this really, really positive note. And so it sort of gave us a little bit of joy and light at the end of a very dark tunnel. It was just a magical experience for everybody,” Holly said.

Even in dark times, there is hope to be found. For the Soapes, that hope was found in Anthony. Instead of what could have been a dark day for Audrey as she stood alone at the father-daughter dance, Anthony gave her something to smile about. He reminds us to support one another, and Audrey reminds us to keep on dancing.