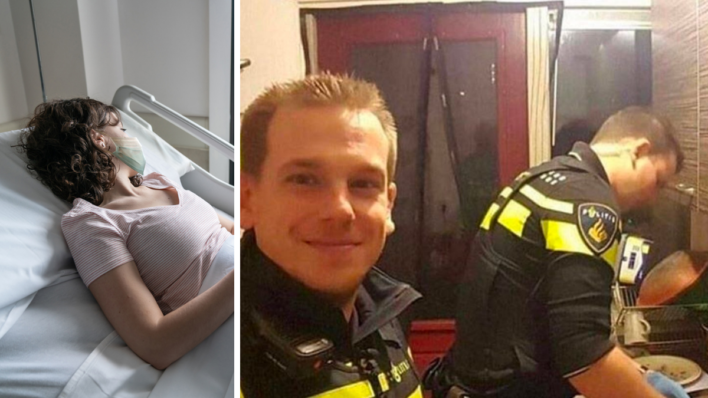 We usually associate police officers with fighting crime, making arrests and locking people up. However, two amazing Dutch police officers gave “to serve and protect” an inspiring new meaning when an ailing mom was rushed to the hospital.

In Eindhoven, Netherlands, emergency services were dispatched to the home of a woman suffering from hypoglycemia, or unusually low blood sugar. According to the Mayo clinic, if untreated, the condition can result in seizures, loss of consciousness and even death.

What’s worse, while the woman was rushed to the hospital for tests, her five children were left unattended and unfed.

Saviors arrive on the scene

Two police officers responded to the call alongside the paramedics. With the mother rushed to the hospital for tests, the officers stepped up.

They whipped up fried egg sandwiches and fresh fruit for the five children and kept them entertained. To go even further, they washed an entire sink full of dishes. The Eindhoven Police Facebook page captured one of the uniformed officers scrubbing away with blue latex gloves.

The story was also picked up and posted to Linkedin’s ‘Everyday Heros’ page, generating even more awesome responses.

“What a fantastic story! Makes a person smile!” posted one.

“Talk about community policing. Making a difference one family at a time. Real men make meals and do dishes,” chimed in another.

We can all be heroes

It is nice to see a story about police not as predators or protectors, but as providers. These two officers treated unattended and unfed kids as seriously as they would any other crime.

This story gives us all a glimpse of what’s possible not just from our police but from each other if we all reacted as they did when someone or something in our community isn’t right.

It might be befriending a stranger down on his luck, helping someone with less or even defending those that can’t defend themselves. Whatever it is, you’d be amazed at the impact it has.

“What we learned from this is that you can change the world one very small step at a time. Stay positive and help where you can”