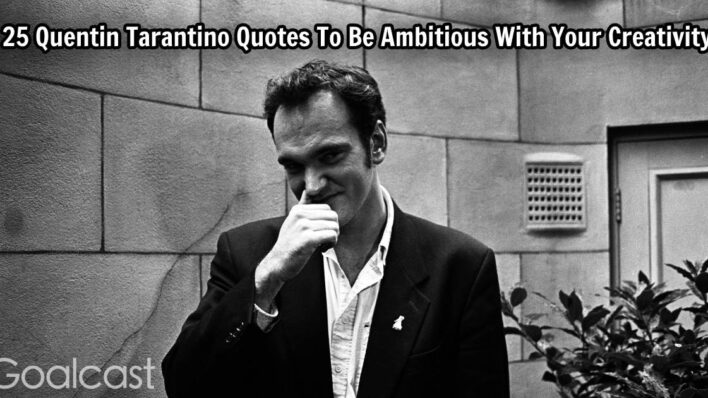 25 Quentin Tarantino Quotes To Be Ambitious With Your Creativity

Quentin Tarantino is an American director, screenwriter and actor whose movies have gathered both critical and commercial success.

The famous director has been in love with watching movies ever since he can remember. It was his favorite thing to do as a child. He hated school and as a result he dropped out of high school and got a job at a video store.

It seemed like a good idea at the time and Tarantino says it would’ve been a fulfilling life if he hadn’t had an inner artist that was screaming to get out. So instead of just watching movies, he began taking steps in creating them.

His directorial debut came with Reservoir Dogs (1992), but his real success came with Pulp Fiction (1994). Apparently Tarantino has a self-imposed 10-film goal and Once Upon A Time In Hollywood (2019) has been billed as his ninth. We’re definitely curious to see if his tenth movie will actually mark the end of his directorial career.

By being able to put his specific vision right on the screen, Tarantino is currently one of the most accomplished directors in the history of cinema.

Watch this Goalcast video to push yourself towards your dreams:

Here are 25 Quentin Tarantino quotes on ambition and creativity:

I realized I should be the weakest link in my chain. And that will make me be stronger, I’ll make me run faster.

I want to top expectations. I want to blow you away.

The good ideas will survive.

Movies are not about the weekend that they’re released, and in the grand scheme of things, that’s probably the most unimportant time of a film’s life.

I grandiose my way out of fear.

Don’t write what you think people want to read. Find your voice and write about what’s in your heart.

I want to risk hitting my head on the ceiling of my talent. I want to really test it out and say: Ok you’re not that good. You just reached the level here. I don’t ever want to fail, but I want to risk failure every time out of the gate.

I don’t think there’s anything to be afraid of. Failure brings great rewards — in the life of an artist.

If my answers frighten you then you should cease asking scary questions.

Keepin’ you at a disadvantage, is a advantage I intend to keep.

I couldn’t spell anything. I couldn’t remember anything, but I could go to a movie and I knew who starred in it, who directed it, everything.

A writer should have this little voice inside of you saying, Tell the truth. Reveal a few secrets here.

I actually think one of my strengths is my storytelling.

Gentlemen you had my curiosity… but now you have my attention.

Violence in real life is terrible; violence in movies can be cool. It’s just another color to work with.

In real life there are no bad guys. Everybody just has their own perspective.

There are two ways: my way and the highway.

‎That’s when you know you’ve found somebody really special. When you can just shut the fuck up for a minute and comfortably share silence. Pulp Fiction

I don’t believe you should stay onstage until people are begging you to get off. I like the idea of leaving them wanting a bit more.

Emotion will always win over coolness and cleverness. It’s when a scene works emotionally and it’s cool and clever, then it’s great. That’s what you want.

One of the privileges you have of living the life of an artist and creating your own world and everything is the fact that, in-between times, you can kind of spend them however you want.

If you want to make a movie, make it. Don’t wait for a grant, don’t wait for the perfect circumstances, just make it.

Just because you are a character doesn’t mean you have character.