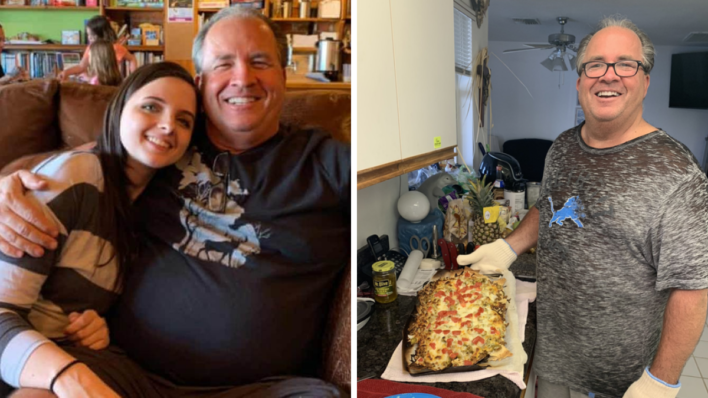 When one father lost his job during COVID, his awesome daughter took to Twitter to help him land his dream
By Bryan Liquor    July 5, 2021

When one father lost his job during COVID, his awesome daughter took to Twitter to help him land his dream job.

According to the Wall Street Journal, up to 40 million jobs were cut due to the COVID-19 pandemic. One of these belonged to Rebecca Mix’s father, Jeff.

Keen to help her dad bounce back, Mix took to Twitter and her 20,000+ followers to promote her top candidate.

“My dad has been laid off due to covid and now that he’s vaccinated he’s itching to go back to work, so I told him I’d help him with his resume. I asked him where he wants to work, and he said, SO earnestly, ‘Costco seems like a nice place’ I’m gonna cry lol,” she tweeted.

Then, in the job posting pic of the year, she also shared a photo of Jeff wearing oven mitts, posing proudly next to a plate of nachos.

“He is but a constantly cheerful man, extremely good at making nachos, who merely dreams of working for Costco,” she posts.

“Costco ik ur not on twitter but if you see this please don’t let him down, my dad is very nice. look how proud he is.”

Just two weeks later, Mix was contacted by a local Costco manager to arrange an interview with Jeff.

Amazingly, her dad landed his job, with the shiny badge to prove it.

Mix had a special message of thanks to Costco CEO Craig Jelinek.

“Craig Jelinek if u see this I have no idea how u found my tweets but congrats on hiring my dad he’s the best thanks!!!!! also my dad already tried to convince me to sign up for a Costco membership lol. man hasn’t even started yet. what have I done.”

Positive tweets to daughter and dad poured in.

“AWESOME! Congratulations to your dad — and to the Costco manager, who has probably just made one of the best hires in that branch,” wrote one Twitter user.

Toasted another: “OMG Congratulations to Jeff long may he help people find things up on the tall shelves and have a $1.50 hot dog whenever he wants!!!!”

It’s been a tough year and a half for everyone. It’s been especially hard for those who are still out of a job. The future is still uncertain.

Yet there’s one thing that is certain: We’ll only get through this together.

Healing will happen through acts of kindness like a Linkedin letter, traveling takeout, or an awesome daughter like Rebecca Mix. The story might change but the theme is the same: Humans connecting to help humans. Every action we take and gesture we make impacts someone.