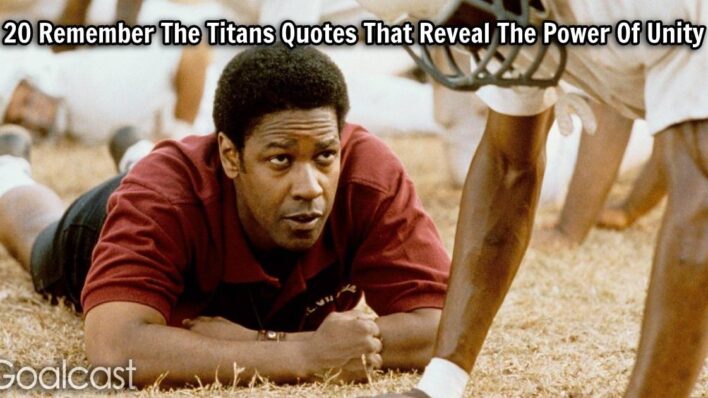 20 Remember The Titans Quotes That Reveal The Power Of Unity

Remember the Titans is widely recognized as one of the best biographical sports films of all time. The movie is based on the true story of African-American coach Herman Boone (portrayed by Denzel Washington), who led the T. C. Williams High School football team to a state championship in 1971.

The events of the movie take place in a time where racial tensions were still high. In an attempt to reduce racial segregation, the city consolidated all high school students into one public senior high school — T.C. Williams. In addition, Herman Boone was hired to lead the school’s football team

At first, both white and black players refused to even speak to each other. Coach Boone decides to take action and after a long struggle, the boys begin to understand the real meaning of ‘team’. The ongoing training under the strict guidance of Coach Boone made the players gradually ignore racial prejudice, and ultimately bring their community together.

The following Remember the Titans quotes are some of the most memorable lines from the movie. Some of them are harsh, but extremely motivational.

Here are 20 Remember the Titans quotes about teamwork and leadership:

I’m not gonna talk to you tonight about winnin’ and losin’. You’re already winners ’cause you didn’t kill each other up at camp.

You listen, and you take a lesson from the dead. If we don’t come together right now on this hallowed ground, we too will be destroyed, just like they were. I don’t care if you like each other of not, but you will respect each other. And maybe… I don’t know, maybe we’ll learn to play this game like men.

According to Greek mythology, the Titans were greater even than the gods. They ruled their universe with absolute power! Well that football field out there tonight, that’s our universe. Let’s rule it like Titans!

Yeah. I hope you boys have learned as much from me this year as I’ve learned from you. You’ve taught this city how to trust the soul of a man rather than the look of him. And I guess it’s about time I joined the club.

People say that it can’t work, black and white; well here we make it work, everyday. We have our disagreements, of course, but before we reach for hate, always, always, we remember the Titans.

I don’t scratch my head unless it itches and I don’t dance unless I hear some music. I will not be intimidated. That’s just the way it is.

Now, I ain’t saying that I’m perfect, ’cause I’m not. And I ain’t gonna never be. None of us are. But we have won every single game we have played till now. So this team is perfect. We stepped out on that field that way tonight. And, uh, if it’s all the same to you, Coach Boone, that’s how we want to leave it.

It’s all right. We’re in a fight. You boys are doing all that you can do. Anybody can see that. Win or lose… We gonna walk out of this stadium tonight with our heads held high. Do your best. That’s all anybody can ask for.

Coach Yoast: I think this is a very good time for prayer and reflection…

Sometimes life is hard for no reason at all.

Coach Boone: A water break? Water is for cowards. Water makes you weak. Water is for washing blood off that uniform and you don’t get no blood on my uniform, boy you must be outside yo mind! We are going to up-downs, until Blue is no longer tired, and thirsty

Whatever kind of ambition it took to do what you did around here, this world could use a lot more of it Herman.

CAUSE BABY THERE AIN’T NO MOUNTAIN HIGH ENOUGH, AIN’T NO VALLEY LOW ENOUGH …