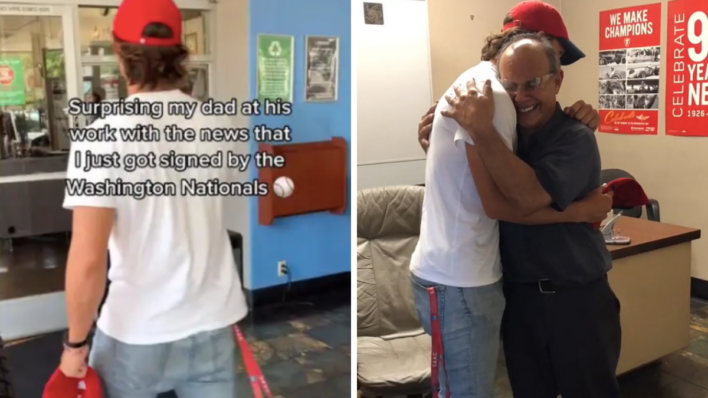 A viral video shows a hard-working father tear up as his son surprised him at work after signing a Major
By Joel Balsam    July 23, 2021

A viral video shows a hard-working father tear up as his son surprised him at work after signing a Major League Baseball contract.

The MLB draft came and went, and Robert Anthony Cruz went undrafted. To take his mind off the disappointment, he played the game Minecraft.

Then, something incredible happened.

He got a call from the Washington Nationals baseball team who said they’d be interested in signing him as an undrafted player.

“I hadn’t spoken to scouts in at least a week, so I was thinking I probably wasn’t being considered,” Cruz, who cried tears of joy with his mom, Cynthia, told The Washington Post.

Cruz wanted to tell his dad, Ron, about the good news, but he didn’t think a phone call would do. So, he and his mom swung by a nearby Lids store to pick up a couple of Nationals ballcaps to bring to Ron at work.

In a Tiktok video that now has nearly 17 million views, Cruz showed up at the auto shop his dad works at and went to meet his hard-working pops as Cynthia recorded.

“Surprising my dad at his work with the news that I just got signed by the Washington Nationals,” Cruz wrote in the video, before adding in the caption, “My name wasn’t called in the draft, but I got a surprise free agent contract.”

“What happened?” Ron, 61, asked, before noticing the baseball cap on his son’s head. Then, the two gave a long, emotional hug as Ron started to tear up.

My Dad is a gem. Hardest worker I know. My name wasn’t called in the draft, but I got a surprise free agent contract.

Cruz told The Post that his dad has always been there for him through thick and thin.

“Since I was about 9 years old, my dad has always thrown me batting practice whenever he gets off work,” Cruz said. “He’ll work a long day, and I’m sure he’s tired, but he’s never said no one time. Last summer, with covid and everything, I didn’t have anywhere to train. He was throwing me batting practice every day after work. It was super special to be able to celebrate him a little bit with that video because he’s the hardest worker I know.”

Cruz said he plans to put his photography business and degree in Christian ministries on hold as he pursues a full-time career in baseball. He also plans to cheer for a new team instead of his hometown LA Dodgers.

“I guess now I’ve got to like the Nationals, just out of obligation, even though they took my team out in 2019,” he said.

We can’t accomplish our dreams alone

We all have dreams, but the thing with dreams is that they can take years and years of hard work to come true — especially ones that involve becoming a pro athlete. So it was truly special to be able to witness the moment that it all paid off for one new MLB player.

But what was even more special about this video was how instead of sharing the moment he got offered a contract, he showed the one person who helped get him there. Because at the end of the day, it takes a strong support system to help any dream come true.