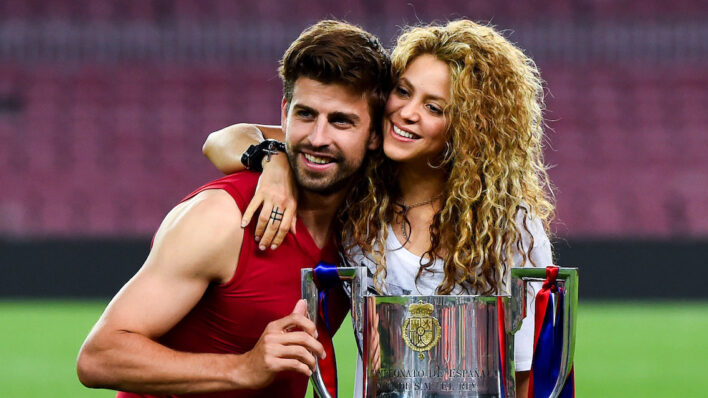 Shakira and Gerard Pique have been together for over 10 years, defying the odds of celebrity relationships despite their age difference.
By Barbara Pavone    July 24, 2020

Shakira and Gerard Pique have been together for over 10 years, defying the odds of celebrity relationships despite their age difference.

Shakira and Gerard Piqué have never followed a rule book when it comes to their love life and growing family (which includes sons Milan and Sasha) and they wouldn’t have it any other way. As Shakira once proclaimed herself, “We have never been a traditional couple.”

It’s a fact they’re proud of — and with good reason. The pair has been together for a decade and, despite a 10-year age gap — she’s older — and all of the challenges life has thrown their way, including a major medical scare for Shakira, they’ve retained their unbreakable bond. To make things sweeter, they even share a birthday: February 2nd.

While celebrating 10 years of love in 2020, Piqué recalled their first encounter during the 2010 FIFA World Cup (which his team won), telling L’Esportiu, “I won the biggest title one can get and met the love of my life.” Meanwhile, Shakira has called Piqué “The One” and yet, despite their obvious connection, they’re adamantly against marriage.

Here’s what we can learn from Shakira and Gerard Piqué’s unique approach to love:

Shakira and Gerard Piqué first met after the Barcelona soccer star was chosen to appear in her video for the official 2010 FIFA World Cup anthem, “Waka Waka (This Time for Africa).” Piqué was one of a handful of players in the video, but he still managed to stand out. As Shakira later told 60 Minutes that she wasn’t even a fan of soccer, but that didn’t prevent her from meeting the love of her life.

I wasn’t a soccer fan, so I didn’t know who he was, but when I saw the video, I was like, ‘Hmm. That one’s kind of cute.’ Then someone decided to introduce us.

At the time, Shakira was with fiancé Antonio de la Rua and the couple didn’t confirm their split until January 2011. In a joint statement posted to her site, they wrote, “During our almost 11 years together we have loved each other deeply, taken care of each other and stood by one another.”

Calling them “the most wonderful years of our lives,” the couple explained, “We move forward as partners, developing projects together, working hand in hand and in close communication.”

But when she began being spotted spending time with Piqué, the media immediately assumed he was the reason for Shakira’s breakup. When paparazzi caught him at Barcelona airport that month, he denied the rumors, saying, “We’re just friends. There’s nothing more to it. I don’t know anything about the break-up.”

That might not have been entirely true, however. Despite repeatedly denying that they were dating, the couple finally made their union official in March 2011 when the Colombian singer-songwriter posted a photo with her new beau across social media, writing “Les presento a mi sol,” meaning “I present to you my sunshine.”

He completely restored her faith

In September 2012, Shakira and Gerard Piqué revealed that they were expecting their first child. “As some of you may know, Gerard and I are very happy awaiting the arrival of our first baby!” she gushed on her website. The following January, they welcomed their son, Milan Piqué Mebarak. Revealing the story behind his unique name, Shakira wrote, “The name Milan (pronounced MEE-lahn), means dear, loving and gracious in Slavic; in Ancient Roman, eager and laborious; and in Sanskrit, unification.”

‘Milan’ could also be used to describe their perfect union. As the “Hips Don’t Lie” singer told  Elle in June 2013, her partner gave her a lot more than love and family — he restored her faith.

Admitting that she “had lost my faith for a while,” Shakira told the mag, “I was becoming an agnostic. And it was really hard, because I was always very religious, and for a few years, maybe because — it sounds so corny — I was not feeling the love like it was supposed to be, I started to think that there was no God. And suddenly I meet Gerard and the sun comes out.”

Jump to January 2015 and Shakira announced her second pregnancy on Instagram, writing, “Our second son arrives soon.” Just 10 days later she gave birth to Sasha Piqué Mebarak. “The name Sasha is of Greek and Russian descent and means ‘defender of mankind’ and ‘warrior,'” she explained on Instagram.

Following the birth of her first child, Shakira sat down with Us Weekly for a candid talk about motherhood and revealed just how involved her partner is. “He has been amazing,” she told the outlet in April 2013. “The baby spends as much time with me as he does with his dad. He’s the kind of dad who’s full hands on,” she continued.

“He changes diapers, he bathes him, he enjoys playing with the baby, he enjoys feeding him, all of that stuff.” Noting that he’s been a “great help,” she also specifies that his help is incredibly meaningful to her.

I can’t imagine doing all of this and not having the father do his part of the job. So that’s a huge help to me.

When, after the arrival of her second son, Parents asked the star what she’s doing to “raise your boys to be modern men,” she again shared praise for Piqué. “Growing up with a working mom is a start,” she noted.

I also think their dad is a good example of a modern man to emulate. Gerard and I pretty much share all parenting responsibilities, although I’m definitely the disciplinarian.

And it seems that hasn’t changed with time. In 2019, Shakira shared that their key to success has been full partnership and splitting all responsibilities. “We have never been a traditional couple,” she told Viva Magazine.

“We don’t have a written deal to share the tasks or anything like that, but we both are very involved in parenting and try to sort it out the best we can, we support each other and we also find a huge help in our families. We don’t know a different way to do it!”

At the end of the day, they just “try to do the best we can,” she told Hola! “There’s a lot of love; that’s the foundation of any family,” she continued. “You have to take care of it and dedicate time. Family is the most important thing for me; the rest is secondary.”

He was there when she needed him most

In 2017, Shakira suffered a frightening medical scare when she suffered a hemorrhage in her vocal cords that left her unable to sing. She was barely able to speak and, as she told The Guardian, it was one of the lowest points in her life. “When I couldn’t sing, that was unbearable,” she recalled. “There were times I couldn’t even get out of bed — I was so depressed.”

Opening up about that difficult time, Shakira admitted she was fighting with Gerard more than ever before, but at the end of the day, he was there for her when she needed him most, no questions asked. “I was not positive. I was so pessimistic. I was a bitter person to be around,” she admitted.

“Gerard saw the worst of me.” And yet, he stood right by her side.

There’s nothing wrong with avoiding marriage

In 2020, Shakira and Gerard Piqué celebrated a decade of love, but don’t expect them to walk down the aisle any time soon. As Shakira has adamantly expressed over the years, she doesn’t want to say “I do,” which isn’t to say she doesn’t want to spend the rest of her life with Piqué. In fact, she’s sure she’s found The One.

Shakira first fended off questions of marriage in a 2014 Glamour interview when she reasoned, “We already have what’s essential, you know? We have a union, a love for each other, and a baby. I think that those aspects of our relationship are already established, and marriage is not going to change them,” she explained, adding.

But if I’m ever going to get married, he’s the one.

Years later, she feels exactly the same way. In 2020, when 60 Minutes host Bill Whitaker pointed out that, “for all intents and purposes, you two are married,” she was quick to set him straight. “We’re not married,” she said. “To tell you the truth, marriage scares the **** out of me. I don’t want him to see me as the wife. I’d rather him see me as his girlfriend,” she laughed. “His lover, his girlfriend. It’s like a little forbidden fruit, you know? I wanna keep him on his toes,” she quipped.

I want him to think that anything’s possible depending on behavior.

Love is unique to every couple and it doesn’t matter what others think you should do. All that matters is that you stay true to your heart and do what you want to do. Shakira and Gerard Piqué are proof. Over the years, they’ve disregarded pushes to get married — but they’ve had kids.

They’ve ignored their significant age difference — and thrived. Despite the fact that their partnership might look unconventional from the outside, it’s resulted in a 10-year union filled with bliss that only keeps getting stronger with time.