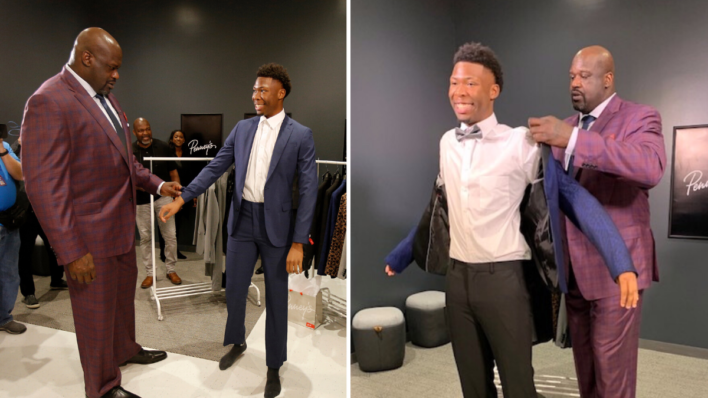 When a beloved basketball player was facing defeat on prom night, along came an NBA star with a penchant for sweet surprises to save the day.
By Bryan Liquor    May 26, 2022

When a beloved basketball player was facing defeat on prom night, along came an NBA star with a penchant for sweet surprises to save the day.

According to the scouting site ‘Future150’, his strengths include his low post footwork and finishing through contact.

Among his teammates, he’s known as a compassionate and selfless leader who gives them rides and supports them while keeping his grades up.

However, at 6 foot 9 and 200-pounds, the teen admits that his frame can be his biggest foe. He told NBC5 that nowhere does this stand out more than when shopping for clothes.

RELATED: When Shaq Discovered A Teen Boy’s Mom Couldn’t Afford Extra-Large Shoes, He Did This

“Finding clothes to fit me is hard sometimes,” he said. “I have to go across town to find pants, then go on the opposite side to find a shirt.”

And so, with his high school prom fast approaching, it looked like Owens had met his match. Then, with the clock winding down, he’d get a shocking all-star assist for the ages.

One day at home, Owens’ father informed him of some exciting news, courtesy of department store chain JCPenney. “My dad received an email about winning a free clothes giveaway. I had no idea what was going on,” he said.

Little did Owens know, this wasn’t your average giveaway. The teen’s work as a basketball player and member of his community caught the attention of the store and their brand ambassador, none other than NBA Hall of Fame and gentle giant, Shaquille O’Neal.

RELATED: Shaq Overhears Man Struggling To Purchase Engagement Ring, Steps In And Pays For It

At over 7 feet and over 300 pounds, O’Neal told CBS that he can relate to the teen’s wardrobe woes.

Joined by JC Penney CEO Jill Soltau, O’Neal surprised the starstruck Owens. And, after cycling through three suits, they found the freshest-fitting suit for the teen.

Along with the fresh threads, the hulking legend had another gift for the young teen by sharing his secret for success.

Listen to your parents. I got where I am right now by my family. Your parents have your best interests at heart; they can help guide you the right way. That is why I am the man I am today.

Kerrie Owens, the young boy’s mother, was delighted to hear this.

“We want the best for him,” Kerrie said. “I’m always talking to him to do this and do that, so I’m glad Shaq followed it up,” she glowed.

Why Paying it Forward is Always the Best Play

Owens said that day gives him motivation that fuels both his hoops and human dreams.

I feel very special today. He was like me once, so I know that it’s possible to be someone like him one day.

For the 4-time champion, making a kid smile and sparkle is what it’s all about. “To know I can make a kid smile, it’s just about making people happy,” he said.

Really, what good would all of Shaq’s success, rings, and revenue really mean if he kept to himself? When the cameras are off and his career’s over, he realizes our true legacy is in the impact we make on others during the brief time we’re here.

Whether it’s saving someone’s prom or just some words of wisdom, we can all pay our life lessons forward to make someone’s future a little brighter.