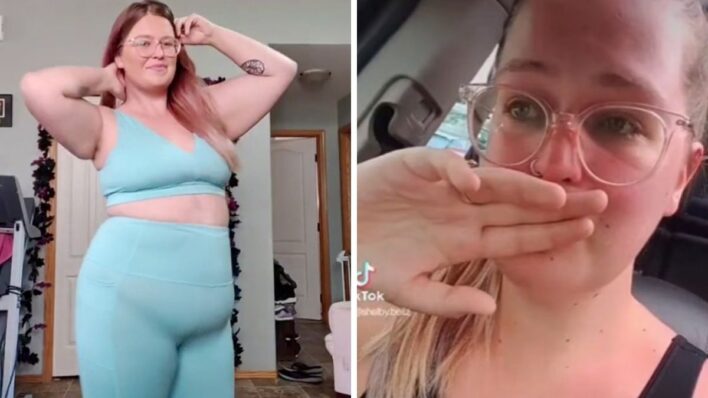 Anyone who’s been in a rut knows how difficult it is to get momentum. So when our efforts are met
By Bryan Liquor    September 17, 2021

Anyone who’s been in a rut knows how difficult it is to get momentum. So when our efforts are met with ignorance and fat-shaming, it can be disheartening.

26-year-old Shelby Rodriguez of Alberta, Canada can vouch for that. The single mother of one was on her third trip to the gym since starting her health journey, which she captured on TikTok.

It was a trip to forget.

In a video taken in her car, a sobbing Rodriguez recounted what happened. She said that arriving at the front desk, she was immediately stopped by the receptionist.

She was told that they “have a policy that you’re not allowed to wear sports bras to the gym. Then, when Rodriguez asked for clarity, the receptionist replied “Well we can’t just have our bellies hanging out.”

In a Bored Panda article, Rodriguez said that the receptionist let her off with a warning and gave her a bracelet pass for her workout.

However, just when the cringe seemed over, the worst was on its way. That’s when 15 minutes later while on the treadmill, Rodriguez was approached by the program coordinator, who began harassing her.

“Well you just can’t be here wearing that,” they kept saying to Rodriguez.

No matter how many times I tried to explain and again show the wrist band. This went on until I was emotional and didn’t know what else to do but leave, it was clear that I wasn’t welcome.

She got stronger from it

While some accused Rodriguez of overreacting, most among the over 142,000 likes came to her defense and reminded her of her worth.

“Oh honey do not be embarrassed, they should be embarrassed. I would name and shame them. Don’t cry remember you’re beautiful and strong,” said one.

“You are beautiful and rock that outfit, don’t let them steal your joy,” said another.

Another was quick to remind others of Rodriguez’s already tough journey.

“To anyone who thinks she’s overreacting. You have no idea how hard it is to start going to the gym out of fear THIS would happen.”

Rodriguez insisted that her issue was not about rules, but respect.

“While I understand I was not completely in the right by making the mistake of wearing the sports bra in the first place, the gym also handled the situation badly,” she said.

Self-love is a size that fits all

Looking back at what happened, Rodriguez believes it’s a reflection on other’s ignorance than her gym gear.

For those who think she’s giving up, you clearly don’t know Shelby Rodriguez.  “I’m still going back to that same gym. I’m not giving up,” she said.

She also has a message for those struggling on their path.

Keep going even when something brings you down. Don’t let small bumps in the road make huge ripples in your life.

This isn’t a story about gym policy or passes. It’s about communicating with empathy, because you just don’t know what’s lies behind someone.

But let’s be honest: Not everyone we come across got the memo. It’s moments like that to remember your worth, because self-love fends off fools and fuels your journey to being your best self.