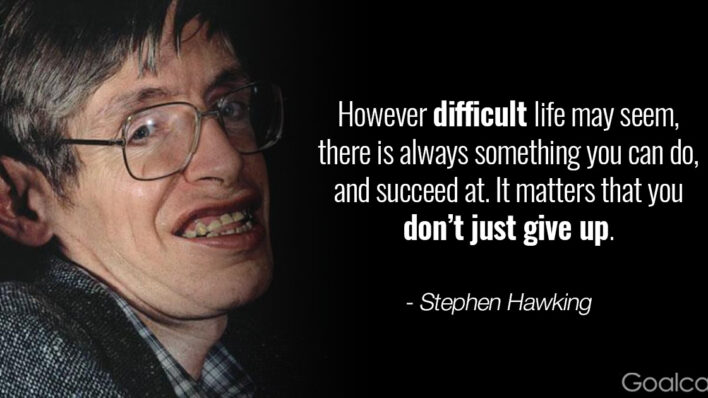 British physicist Stephen Hawking was probably the most recognizable and admired scientist of all times. Diagnosed with amyotrophic lateral sclerosis (ALS),
By Goalcast    July 25, 2017

British physicist Stephen Hawking was probably the most recognizable and admired scientist of all times. Diagnosed with amyotrophic lateral sclerosis (ALS), a form of motor neurone disease, at age 21, he overcame debilitating illness to produce some of the most groundbreaking scientific theories in the last few centuries.

Hawking’s goal had been no less than to understand the workings of the universe, devoting his life to uncovering “The Theory of Everything” — the fitting title of the 2014 Oscar-winning portrayal of his life. Stephen Hawking might have been disabled in body, but certainly not in his ambitions.

Stephen Hawking was hands down one of the most inspiring and transformative figures of the last century. Here are the Top 13 Stephen Hawking quotes to inspire you to think bigger. My advice to other disabled people would be, concentrate on things your disability doesn’t prevent you doing well, and don’t regret the things it interferes with. Don’t be disabled in spirit, as well as physically.

It is no good getting furious if you get stuck. What I do is keep thinking about the problem but work on something else. Sometimes it is years before I see the way forward. In the case of information loss and black holes, it was 29 years.

Intelligence is the ability to adapt to change. I have noticed that even people who claim everything is predetermined and that we can do nothing to change it, look before they cross the road.

We are all different, but we share the same human spirit. Perhaps it’s human nature that we adapt and survive.

So next time someone complains that you have made a mistake, tell him that may be a good thing. Because without imperfection, neither you nor I would exist.

Try to make sense of what you see and wonder about what makes the universe exist. Be curious, and however difficult life may seem, there is always something you can do, and succeed at. It matters that you don’t just give up. One, remember to look up at the stars and not down at your feet. Two, never give up work. Work gives you meaning and purpose, and life is empty without it. Three, if you are lucky enough to find love, remember it is there and don’t throw it away.

I am just a child who has never grown up. I still keep asking these ‘how’ and ‘why’ questions. Occasionally, I find an answer.

Black holes ain’t as black as they are painted. They are not the eternal prisons they were once thought… So if you feel you are in a black hole, don’t give up. There’s a way out.

Keeping an active mind has been vital to my survival, as has been maintaining a sense of humor.

Some people would claim that things like love, joy and beauty belong to a different category from science and can’t be described in scientific terms, but I think they can now be explained by the theory of evolution.

It is a waste of time to be angry about my disability. One has to get on with life and I haven’t done badly. People won’t have time for you if you are always angry or complaining.

I have no idea [what my IQ is]. People who boast about their I.Q. are losers.