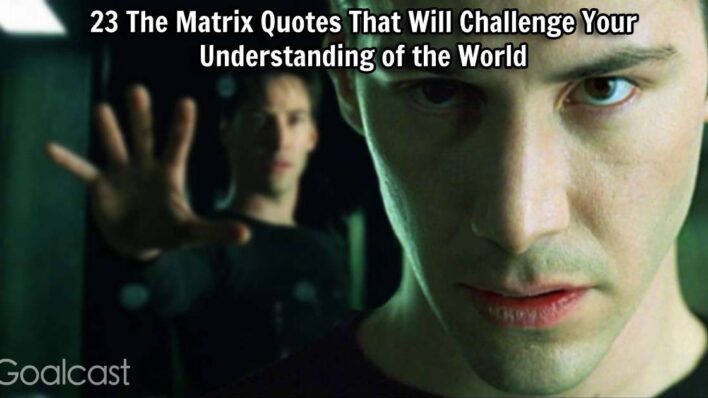 The Matrix is considered one of the greatest sci-fi movies ever made. Here are 25 The Matrix quotes that will challenge your understanding of the world.
By Flavia Medrut    February 28, 2020

The Matrix is considered one of the greatest sci-fi movies ever made. Here are 25 The Matrix quotes that will challenge your understanding of the world.

In 1999 the Wachowskis brought to us one of the greatest science fiction movies of all time — The Matrix. The mind-bending film’s massive success later led to the release of two feature sequels.

To think that movie stars like Will Smith and Nicolas Cage formally turned down the role of Neo… Well, luckily Keanu Reeves was there to save the day and we’re glad he did it, because now we can’t imagine anyone else playing Neo.

The same happened with Morpheus’s role. Apparently, The Matrix was quite underestimated by Hollywood’s elite actors, yet the movie became a sci-fi phenomenon praised for its innovative visual effects.

With four Academy Awards under its belt and many other important accolades, we still can’t believe it’s been almost 21 years since the first Matrix was released. But here we are, waiting for the fourth movie to come up in 2021.

That’s right! We get to see our favorite heroes fighting the good fight one last time, but until then, we’ve gathered some great The Matrix quotes for you to enjoy.

Here are 23 The Matrix quotes that will challenge your understanding of the world:

This is your last chance. After this, there is no turning back. You take the blue pill — the story ends, you wake up in your bed and believe whatever you want to believe. You take the red pill — you stay in Wonderland and I show you how deep the rabbit-hole goes.

Ever have that feeling where you’re not sure if you’re awake or dreaming?

Choice is an illusion created between those with power and those without.

I believe that, as a species, human beings define their reality through misery and suffering. The perfect world was a dream that your primitive cerebrum kept trying to wake up from.

I don’t like the idea that I’m not in control of my life.

What’s really going to bake your noodle later on is, would you still have broken it if I hadn’t said anything?

Throughout human history, we have been dependent on machines to survive. Fate, it seems, is not without a sense of irony.

It came to me when I tried to classify your species and I realized that you’re not actually mammals. Every mammal on this planet instinctively develops a natural equilibrium with the surrounding environment but you humans do not.

I’m trying to free your mind, Neo. But I can only show you the door. You’re the one that has to walk through it.

Denial is the most predictable of all human responses.

That’s how it is with people. Nobody cares how it works as long as it works.

To deny our own impulses is to deny the very thing that makes us human.

There’s no escaping reason, no denying purpose. Because as we both know, without purpose, we would not exist.

The Matrix is everywhere. It is all around us. It is the world that has been pulled over your eyes to blind you from the truth. A prison for your mind.

The only way you can survive is to spread to another area. There is another organism on this planet that follows the same pattern. Do you know what it is? A virus. Human beings are a disease. A cancer of this planet.

I’ll show these people what you don’t want them to see. A world without rules and controls, without borders or boundaries. A world where anything is possible.

What do all men with power want? More power.

Neo, sooner or later you’re going to realize, just as I did, there’s a difference between knowing the path and walking the path.

The body cannot live without the mind.

You have a problem with authority, Mr. Anderson. You believe you are special, that somehow the rules do not apply to you. Obviously, you are mistaken.

Perhaps we are asking the wrong questions…