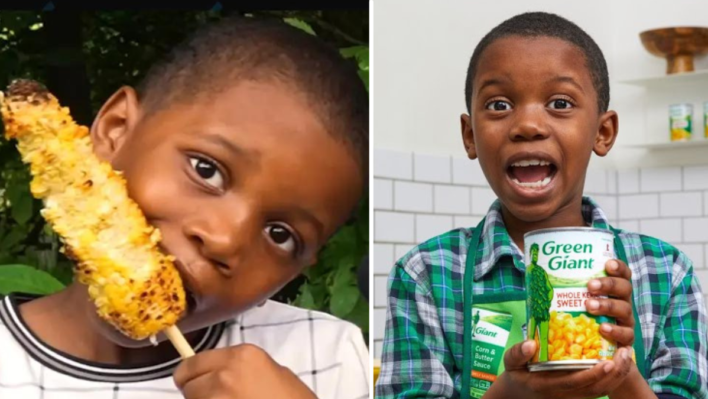 7-Year-Old “Corn Kid” Becomes an Internet Sensation – And Donates 90,000 Cans of Food to People in Need for Thanksgiving

The boy’s huge donation included cans of his own favorite treat – corn!
By Sophie Babinski    November 24, 2022

The boy’s huge donation included cans of his own favorite treat – corn!

Since the pandemic, there has been a huge uptick in the number of families who seek help from food banks.

Thanks to generous donations, including one by a charming young boy known as “Corn Kid,” many families will be able to celebrate Thanksgiving instead of going hungry.

How the “Corn Kid” Is Giving Back This Thanksgiving

When videos go viral on social media, they often do so because they capture something magical that can’t really be manufactured. This was the case when the Instagram account Recess Therapy shared a video of 7-year-old student Tariq enjoying some corn on the cob.

In the clip, Tariq expresses his adoration for the sweet snack — especially when it’s adorned with butter. He tells the interviewer that corn is a “big lump with knobs” that “has the juice” — and viewers couldn’t have agreed more.

RELATED: She Gave Her Baby Up For Adoption On Thanksgiving – 50 Years Later, They Are Finally Reunited

The video was shared millions of times on Instagram and TikTok and Tariq the Corn Kid became an internet sensation. Instead of just riding the wave of social media fame, Tariq and his parents decided to put their newfound notoriety to good use.

Tariq and his family decided that they wanted to give back to the community so they decided to team up with a local organization called City Harvest. Tariq and some television cameras visited a local branch of the organization with 90,000 cans of non-perishable canned vegetables to donate to locals in need.

Being the corn-fanatic he is, Tariq made sure that of those 90,000 cans, 50,000 were corn! The cans were added to meal boxes and delivered to eligible families throughout the city.

Local media was on the scene asking Tariq how it felt to make such an amazing donation. Ever the TV natural, Tariq played to the camera, telling interviewers to zoom in on his face as he told them: “it makes me feel…great!”

Not only does doing good make Tariq feel great, it also has an amazing impact on his community. City Harvest reported that their demand has risen by 14% thanks to inflation and pandemic fallout — and with allies like Tariq, more people will have full bellies this holiday season.

Tariq’s Corn Kid video went viral originally because it captured the innocence, love, and pure goodness of his spirit. The fact that at 7 years old he decided to use the spotlight to make a real difference only proves that the light the world saw in him was real, and continues to shine bright.

We can’t wait to see the difference the Corn Kid makes in the coming years, and we think that everyone should follow his lead and strive to make a difference for those in need this holiday season.