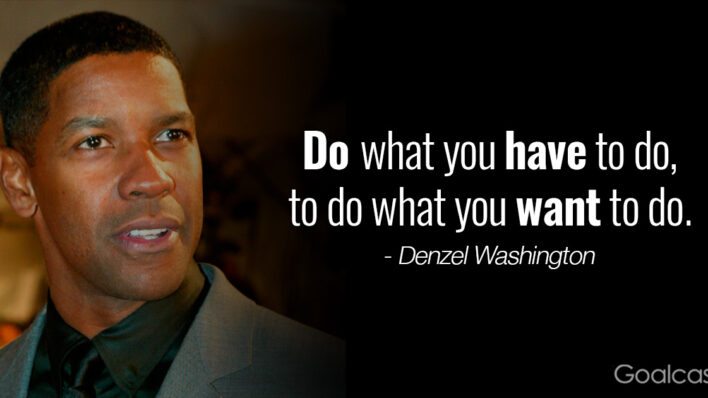 Denzel Washington is one of Hollywood’s most beloved and respected names. The phenomenally talented actor’s decades-long career has seen him launch
By Goalcast    February 27, 2017

Denzel Washington is one of Hollywood’s most beloved and respected names. The phenomenally talented actor’s decades-long career has seen him launch from one heart-stopping role to the next, often in critically acclaimed portrayals of historical figures ranging from Steve Biko to Malcolm X to Rubin “Hurricane” Carter and more. With two Oscars, three Golden Globes, a Tony, and many more nominations to his name – not to mention People’s designation as the Sexiest Man Alive – Washington might seem like the poster child for success. If that weren’t enough, Washington received the Cecil B. DeMille Award for his lifetime of achievement at the 2016 Golden Globes, and in 2017 he came within a hair’s breadth of scoring his third Academy Award for his performance in Fences.

It wasn’t always like this for the son of a Pentecostal minister and a beauty shop owner from the Bronx. From a rough upbringing, Washington struggled through much of his schooling, falling so low in university that they suggested he “take a break.”

He didn’t. Instead, he pushed through, never gave up, and went on to become one of the most recognizable faces in Hollywood today.

Here are the top 15 most inspiring quotes from Denzel Washington.

Success? I don’t know what that word means. I’m happy. But success, that goes back to what in somebody’s eyes success means. For me, success is inner peace. That’s a good day for me.

Do what you have to do, to do what you want to do. I say luck is when an opportunity comes along and you’re prepared for it.

So you never know who you touch. You never know how or when you’ll have an impact, or how important your example can be to someone else.

My faith helps me understand that circumstances don’t dictate my happiness, my inner peace. Got to be who you are in this world, no matter what.

I think a role model is a mentor – someone you see on a daily basis, and you learn from them.

You pray for rain, you gotta deal with the mud too. That’s a part of it. If I am a cup maker, I’m interested in making the best cup I possibly can. My effort goes into that cup, not what people think about it

If you have an enemy, then learn and know your enemy, don’t just be mad at him or her.”

Acting is just a way of making a living, the family is life.

What it taught me was forgiveness. It taught me that when people present themselves in a certain way, there’s probably some back story or issue or reason for the way that they are. It’s not you. It’s them. And a lot of times, its about something that’s completely out of their control.

Watch Denzel Washington’s moving speech on how he failed his way to success: