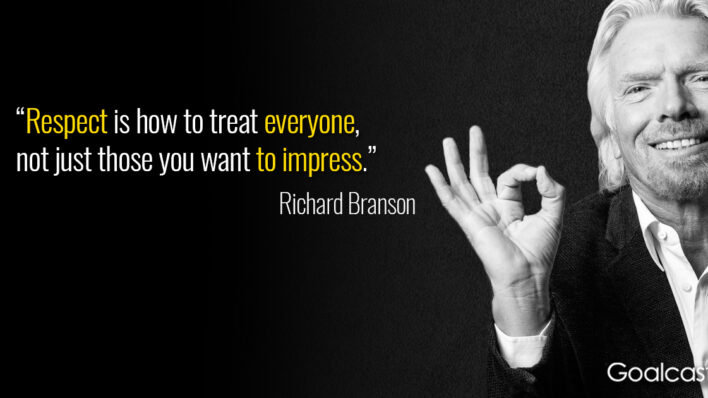 British business magnate and entrepreneur, Sir Richard Branson is the founder and chairman of Virginia Group and one of the
By Flavia Medrut    February 1, 2018

British business magnate and entrepreneur, Sir Richard Branson is the founder and chairman of Virginia Group and one of the richest people out there.

In school, Branson struggled with dyslexia and couldn’t really adapt, so at 16 he decided to drop-out of school and start a youth culture magazine called “Student”. The magazine proved to be a success and was practically the starting point for a humble music store called Virgin Records.

Today, Virgin Group holds more than 400 companies in 30 countries around the world and is still expanding.

Richard Branson is also the author of ‘Losing my Virginity: How I’ve Survived, Had Fun, and Made a Fortune Doing Business My Way’ (among other books), which is an outrageous autobiography of an iconic business genius of our time. Looking back, it is clear that Branson’s goal-oriented nature is responsible for his success whether it be in travel, music or fitness.

Here are 15 Richard Branson quotes to ignite the entrepreneur in you: Respect is how to treat everyone, not just those you want to impress.

There is no greater thing you can do with your life and your work than follow your passions – in a way that serves the world and you.

As soon as something stops being fun, I think it’s time to move on. Life is too short to be unhappy. Waking up stressed and miserable is not a good way to live.

You don’t learn to walk by following rules. You learn by doing, and by falling over.

Do not be embarrassed by your failures, learn from them and start again.”

Luck is what happens when preparation meets opportunity. I have always believed that the way you treat your employees is the way they will treat your customers, and that people flourish when they are praised.

Whatever your goal is you will never succeed unless you let go of your fears and fly.

Capitalism – which in its purest form is entrepreneurism even among the poorest of the poor – does work; but those who make money from it should put it back into society, not just sit on it as if they are hatching eggs.

Hard-won things are more valuable than those that come too easily. If somebody offers you an amazing opportunity but you are not sure you can do it, say yes – then learn how to do it later!

How slim the line is between genius and insanity and between determination and stubbornness.