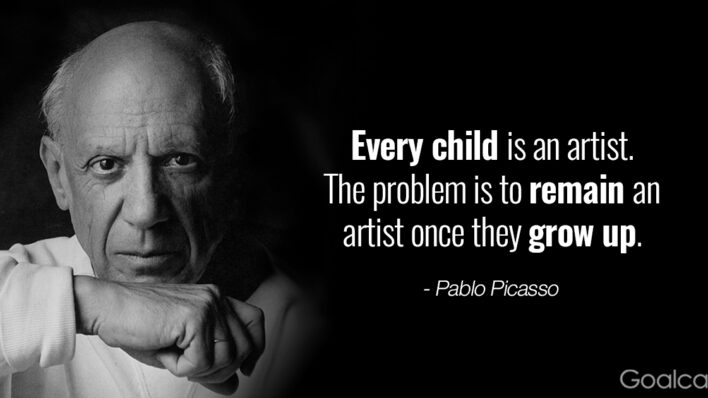 Top 20 Pablo Picasso Quotes to Inspire the Artist in You

Pablo Picasso knew from an early age that he was unlike the rest. Born in Malaga, Spain in 1881, he displayed little skill or interest in school work as a child, and looked forward to his hours spent in detention for being a bad student, where he would lose himself in his sketchbook.

Fortunately for the world, his father was an artist and arts professor, and took a special interest in his son’s talents. He began training him in painting and drawing while he was still very young, and by the time Picasso was 13 years old, his skills had already surpassed his father’s.

Picasso was destined for a life spent swimming against the tide. He chafed at authority, and objected to the rigidity of classical traditions and techniques that were taught to him in the prestigious fine arts schools he attended as a teenager. In 1899, at the age of 18, he fell in with a crowd of radicals, artists and intellectuals in Barcelona who would inspire his break from the classical traditions of his education, and launch him on a path towards innovation and experimentation that would see him grow into one of the most influential and transformative artists in history.

Picasso moved to Paris two years later, and began his lifelong journey through style after style, mastering and profoundly marking each in turn as he charted his own inimitable path. Picasso’s works rarely fit within established traditions: his evolution ran from his early Blue, Rose, and African periods, through to the Cubism tradition he co-founded, and on to a brief return to Realism, before finally diving into the Surrealist movement, which saw him produce one of the famous and powerful anti-war paintings in history — Guernica, a copy of which hangs today in the United Nations headquarters in New York. Throughout his 78 years as an artist, he produced no fewer than 13,500 paintings, 100,000 prints and engravings, 34,000 illustrations, and 300 sculptures and ceramic pieces.

In every stage of his life and career, whether inspired by personal tragedies, wartime traumas, or private elations, Picasso’s genius was fuelled by a passion and authenticity that saw him push the boundaries ever further, flouting all outwards conventions and criticisms as he invented and reinvented the rules of the game, time after time.

Picasso is a legend of the twentieth century, who always followed his heart, especially when it pointed against the grain. So with that in mind, here are our Top 20 Pablo Picasso Quotes to Inspire the Artist in You. Top 20 Pablo Picasso Quotes to Inspire the Artist in You

The purpose of art is washing the dust of daily life off our souls.

I paint objects as I think them not as I see them.

Our goals can only be reached through a vehicle of a plan, in which we must fervently believe, and upon which we must vigorously act. There is no other route to success.

Unless your work gives you trouble, it is no good.

Every child is an artist. The problem is to remain an artist once they grow up. Every act of creation is first an act of destruction.

The hidden harmony is better than the obvious.

The artist is a receptacle for emotions that come from all over the place: from the sky, from the earth, from a scrap of paper, from a passing shape, from a spider’s web.

Inspiration exists, but it has to find you working. What one does is what counts and not what one had the intention of doing.

There is no abstract art. You must always start with something. Afterward you can remove all traces of reality.

It takes a long time to become young.

Action is the foundational key to all success.

Everything you can imagine is real. The chief enemy of creativity is ‘good’ sense.

Everything is a miracle. It is a miracle that one does not dissolve in one’s bath like a lump of sugar.

Art is a lie that makes us realize the truth.