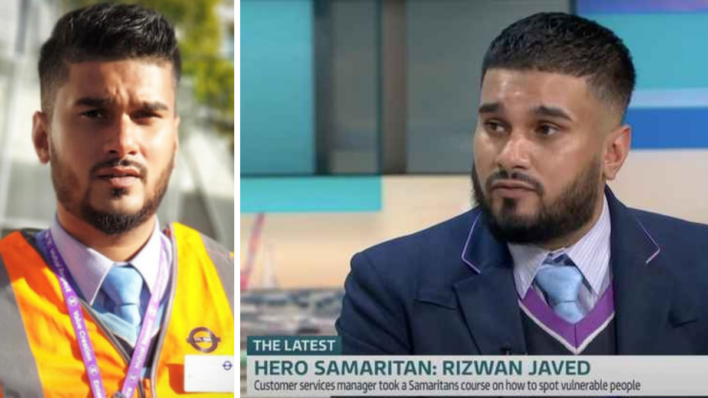 Everywhere you turn there is a person with the capacity to save someone’s life in some way, it is just
By Arielle London    July 13, 2021

Everywhere you turn there is a person with the capacity to save someone’s life in some way, it is just a matter of whether or not they tap into their potential. And London rail worker Rizwan Javed sure does on a regular basis.

Not all heroes wear capes

He wears his cape, a MTR rail uniform, proudly.

22,000 rail employees and British Transport Police officers have done the course so far as a railway suicide prevention measure.

It’s given me a positive mindset, I want to continue to make a difference in my life and spread awareness so others can do the same.

To date, Rizwan has saved 29 lives on the railway. He won the 2018 Samaritans Lifesaver Award, an award that is given to those who use the power of effective and open communication to save lives. Rizwan has said that winning the award was “overwhelming.”

He describes one particular incident where he had to put his training into practice. Rizwan says, “I was on a night shift one day and a young lady walked in.”

The hero continues saying, “As I was going back to my office, I noticed the same person looking distressed. These were signs that rang alarm bells for me, and I had to react quickly.”

Springing into action, Rizwan says, “Initially I phoned the signalmen who control our line, and I got a line block in place. [I then] ran over to the individual [and] made conversation – it wasn’t easy initially, it was hard to engage.”

She had various thoughts in her head but eventually I talked her into a place of safety. After communicating with her for an hour, I called the British Transport Police who were going to come and assist her and provide support.

Rizwan adds, “We contacted her family who came down and were very supportive. Together all of the parties involved ensured she was safe and got the help she needed to potentially get back on track with her life and achieve all of the things she is capable of.”

One week later, the woman reached out to Rizwan to thank him.

“I noticed her from a distance, and she ran over and said ‘thank you’ to me, just for being there that night. It meant the world to me that she was ok and doing well for herself.”

“Having this training quite early in my career gave me the confidence and awareness on how to identify vulnerable people and approach a vulnerable situation.”

“The Samaritans has helped me help other people.”

The power of conversation

Never underestimate the power of a conversation. We are relational beings with the power to do good if we are so inclined. We can all be literal lifesavers when a person is vulnerable or down and in a dark place. A kind word, listening ear, engaging story, or even expression of care and interest has the power to change a person’s world from dismal to hopeful in an instant. And in some cases, such as with Rizwan Javed, it can save many lives.

Today, Rizwan is a positive influence at the station and always makes sure to wish commuters a “good morning” and “lovely day.” Sometimes, that’s exactly what a hero looks like.