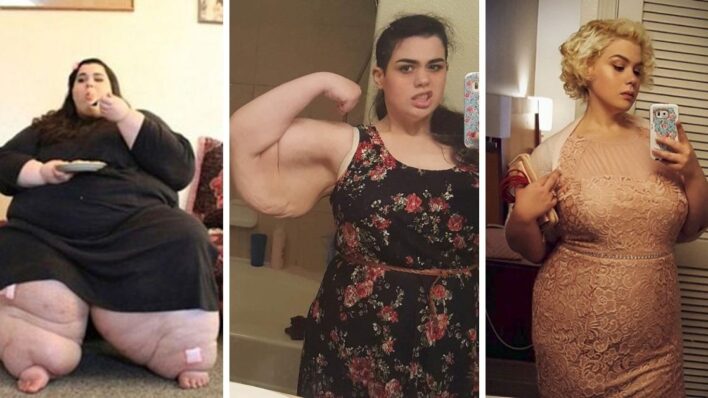 At 657 lbs, Amber Rachdi knew it was time for a drastic transformation. She could barely stand for more than 30 minutes per day. That’s when she decided to turn her whole life around.
By MJ Kelly    August 10, 2020

At 657 lbs, Amber Rachdi knew it was time for a drastic transformation. She could barely stand for more than 30 minutes per day. That’s when she decided to turn her whole life around.

Amber Rachdi struggled with obesity since childhood, but it wasn’t until she could no longer drive or bathe herself that she decided to turn her life around.

Amber, of Troutdale, Oregon was 23 when she first appeared on the popular reality show “My 600-Lb Life.”

At the time, she weighed 657 pounds and felt like a “nasty, yucky monster.”

Amber’s weight issues started to become obvious very early on. At the age of 5, she weighed over 150 pounds and by the time she turned 16, she required a motorized scooter to get around.

In hindsight, it was an anxiety disorder left unchecked that provoked an eating disorder in her teens. Binge-eating brought her comfort when dealing with her anxiety issues, and she was used to eating four huge meals and tons of candy every day, to cope. Her health got so out of control that she dropped out of college.

Being almost completely homebound and only able to stand on her legs for 30 minutes at a time, Rachdi knew something had to change, and with the support of her family, she decided to seek treatment on the TLC show.

She hadn’t been living, but merely existing

On the show, Amber was forced to confront a harsh truth: she hadn’t been living, but merely existing. She enlisted the help of Dr. Younan Nowzardian, a Houston-based surgeon. To qualify for gastric bypass surgery, she had to start by losing 20 pounds and it was only the beginning of her transformation.

Amber and her family made the decision to uproot their lives on the West coast and moved to Houston, to be closer to her doctor. To be eligible for the procedure,

She started by reducing her calorie intake and increasing her physical activity each day, as suggested by Dr. Nowzardian, until she reached her goal.

It was a risky procedure to undergo, but she was ready to take that chance if it meant the possibility of better quality of life.

“I think mostly what it (gastric bypass) does is buy an overweight person time to learn new habits, get into therapy, and learn to make better choices on their own,” she said.

After a successful surgery, Amber became motivated to completely overhaul her lifestyle.

The surgery didn’t fix everything

She began making changes to her diet and started going to the gym regularly, but also needed to address her emotional issues, or all of her efforts would be in vain.

Amver reached out to a therapist for professional help, where she learned to manage her anxiety and better understand her past coping mechanisms so that she could develop healthier ones.

Her weight loss journey empowered her and her transformation started having positive impacts in all areas of her life.

But the weight loss brought a different set of challenges; after her remarkable transformation, she was living with excess skin, which was a constant reminder of her past struggles.

Her doctor then challenged her to lose some more weight, down to 250 pounds, and if she met the target, she’d be suitable to have the operation to remove her excess skin.

Amber saw it as an opportunity and seized it while she could.

From 600 lbs to total bombshell

Since her first appearance on the show, she was able to lose over 400 pounds, and today she’s an Instagram celebrity and an inspiration to thousands of her followers.

After the show, she went back to college, was able to fit in a car and drive again, and has even been approached to do some modeling.

Her strength, courage and her ultimate success reminds us that hard work and determination always pays off in the end, and that we all deserve the chance to live happy and healthy lives.

Watch this Goalcast video for instant motivation from a Navy SEAL:

You don’t live to merely exist

Amber’s incredible transformation is not only a reminder that change is always possible but also a powerful example of what can happen when you stop living your life on autopilot.

It starts with deciding that you deserve better and taking the steps to go after it.