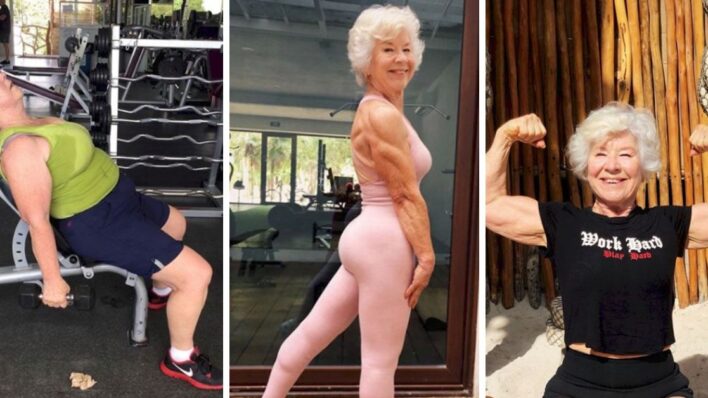 At 70, This Woman Defied All Odds By Starting Her Fitness Journey

After receiving a series of diagnoses for which she had to take medication, Joan MacDonald decided to make major changes, at 70.
By MJ Kelly    May 29, 2020

After receiving a series of diagnoses for which she had to take medication, Joan MacDonald decided to make major changes, at 70.

Joan MacDonald decided it was time to turn her life around after doctors told her she’d have to take more medication to treat her declining health.

At 70 years old, she was already on several medications for high blood pressure, high cholesterol, acid reflux and she’d reached her peak weight at 198 pounds. She had struggled with her weight most of her life, using food as comfort as she went through a difficult marriage.

At the same time, she was recovering from knee surgery and suffered from arthritis, making it difficult to walk up and down stairs.

Joan decided she was not too old to make changes

Despite her old age, Joan was not ready to give up yet. Remembering her mother’s ordeal with medication, she told Shape that she was determined to make a change.

I knew I had to do something different. I had watched my mom go through the same thing, taking medication after medication, and I didn’t want that life for myself.

Her own daughter, Michelle, grew worried about her mother’s physical and mental health over the years.

So when MacDonald opened up to her daughter about her health concerns, Michelle, a professional chef, competitive powerlifter, and owner of Tulum Strength Club in Mexico, didn’t hesitate to step in to help her mom reach her goals.

“She said she was willing to help me get started and said I should join her online workout program to help get me going,” said MacDonald.

Why Joan believes self-care is primordial

Joan mentions that self-care is something she had to develop in order to avoid falling into bad habits. “I believe self-care is important because when self-care isn’t present it means you are functioning with no boundaries,” she told The Daily Mail.

Having no boundaries usually leaves you overworked and tired and that’s when you are susceptible to do things that you don’t want to do [like] overeating.

Joan MacDonald to The Daily Mail

To help get her started off the right foot, Michelle flew her mom to Mexico in January 2017. She then coached her mom on healthy eating and taught her safe exercises with gym equipment and free weights.

I remember picking up a 10-pound weight and thinking it felt really heavy. I was really starting from scratch.

Michelle also taught her mom how to use an iPhone and introduced her to apps for working out, meal planning and keeping track of progress.

After returning home from her two-week stay in Mexico, Joan continued with her new exercise routine and eating habits, and did weekly check-ins with her online fitness group. She trains with weights five times a week and does cardio between 3 to 7 times.

The group of 10 women, from all over the world, regularly talked about their experiences losing weight and posted progress pictures. Joan didn’t enjoy participating at first, but soon understood the value it added to her journey.

Joan stayed accountable and consistent, and within six months, she was down 45 pounds and posing for a fitness magazine alongside her daughter.

Now, Joan’s account has gained over half a million followers.

Over the past four years, she’s lost nearly 65 pounds through hard work and perseverance, but admits she wouldn’t have been able to achieve the same level of success without her daughter’s guidance and support.

“I’ve admired her all along, but having her train me is something else, especially since she doesn’t hold anything back,” said Joan. “She doesn’t let me go at my pace completely. It’s a challenge, but I appreciate it.”

Joan even remarks that the effects have been wonderful for her self-esteem, of course.

I feel much better about myself now and getting compliments from younger men and women sure boosts the self-esteem.

Joan MacDonald to The Daily Mail

Joan’s biggest win was getting a clean bill of health from her doctors and being taken off medications. She hopes sharing her story will help inspire other women wanting to get into fitness and emphasizes that age is just a number.

We are strong [and] capable of change, but we’re often viewed as fragile. I hope that more women my age embrace being pushed and appreciate that someone is interested in seeing you try harder. Even though you can’t turn back the clock, you can wind it up again.

There is no right age to start your journey

If Joan’s incredible transformation journey proves anything, it’s that there is absolutely no age limit to achieving your goal. Whether you are looking to get fit or finish writing that novel you have been thinking about, there is no expiration date to your dreams.

The most important thing is to get started and surround ourselves with people who believe in our dreams.