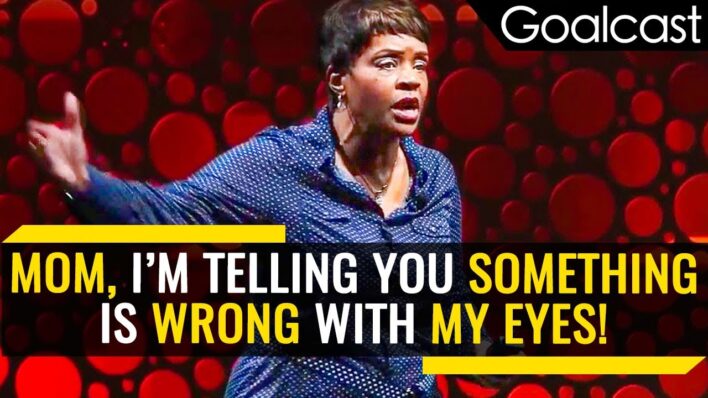 Vera Jones: This is What a Blind Son Taught his Mother about Vision

Vera Jones – Trust Your Vision Vera Jones, a collegiate Hall-of-Fame athlete, learns a lesson from her blind son about
By Goalcast    October 27, 2017

Vera Jones – Trust Your Vision Vera Jones, a collegiate Hall-of-Fame athlete, learns a lesson from her blind son about

Vera Jones, a collegiate Hall-of-Fame athlete, learns a lesson from her blind son about the vision needed to overcome life’s hardships.

In this game of life, everybody gets fouls. My story goes like this; my introduction to passion came when I was five years old, and I first fell in love with a basketball. Yep, basketball is that one thing that afforded me the opportunity to go on to Syracuse University, become a hall of fame athlete. The main thing basketball did for me is it taught me how to play through the fouls.

Fouls are situations, circumstances, technology and people who can limit, hinder, threaten, and alter, and discourage us from our desired goal. Alternately, fouls will turn your life upside down. Want to know what else will turn your world upside down? Children. Yep, that’s right, I am some poor kid’s mother. There Andrew is on his 12th birthday.

Shortly after that … about two months after … Andrew was outside playing football with the neighborhood kids, and he came running in the house crying, hysterically. “What’s wrong?” I said. He said, “Mom! Mom! I was outside and Noah, he went to throw the pass, and I went out to catch it, and then everything got dark, and I didn’t see the electrical box, and I flipped over it, right there in the middle of the lawn. Mom! Mom! Tell me, something’s wrong with my eyes!” Over the past year, he had been complaining of headaches and problems with his eyes, things that weren’t rectified by his eyeglass prescriptions. I decided to get him in to the pediatrician first thing on Monday morning. She said, “This sounds a lot like migraines,” and I said, “No, you know, I know a lot of people with migraines, and he doesn’t seem to ever talk about the light sensitivity and doesn’t get the nausea,” so she orders an MRI.

Fast forward, it’s Tuesday night, and I’m sitting at home. It’s March Madness, I’m in basketball, so my world, right now, is crazy. I’ve got to get to the Big Ten Network in Chicago, so I’m sitting there in my room, studying all these teams, and all of a sudden, I heard this voice, and it was really deep. It said, “Write this down.”

Then I began to write with a fever, and a muse, and a passion I had never experienced before. Out of me, in about 40 minutes came this entire story about this woman who was hanging out with these two knuckle-headed friends, one named Worry, one named Doubt, and as long as she was hanging out with those two friends, her whole world fell apart. Until one day, she passed out and when she woke back up, there was this new friend named, Faith. When she started hanging out with Faith, her entire life improved.

I ran into the living room, I said, “Andrew, you’ve got to listen to this,” and I read him the poem. He said, “Mom, this is a great inspiration! You should make it into your next book,” and indeed, I did. Spoiler alert. There was some things that I had to learn first, you see, my life had been built on passion, and I learned that passion alone, wasn’t enough, because on Wednesday morning, it was time to take Andrew in for that MRI.

Two hours after that MRI, I ended up getting a phone call, “Come in,” and the doctor stared at me with tears in her eyes, and she said, “Andrew has a very large brain tumor. He’s in an emergency situation. We’ll have to get it out, immediately.” Flagrant foul. The next thing I knew, I was standing in front of some neurosurgeon who was telling me there was a good chance that your son may die, but we’re going to do everything we can to save his life. Even if we save his life, there’s a good chance that he will be blind, but we’re going to everything we can to protect his sight. Huge, flagrant foul.

I have no idea how I’m supposed to deal with this, not on my own, but now I have to go, and I’ve got to explain it to my 12 year old biscuit-loving son. Suddenly, as I’m driving, furiously, down the highway, not knowing where to do, the tagline to that poem popped up, “Stop hanging out with Worry and Doubt and make Faith your new best friend.” Right then, I knew that I was given a vision, miraculously, placed inside of me, to know how to lead my son to the next step.

When he came home from school, I said, “Andrew, you remember the story I wrote last night?” He said, “Yeah, Mom, the one about Faith. Did you call the publisher?” I said, “Not yet. You see, that story’s not meant for everyone else, yet. That’s a book for you and me, right now. It’s you and me that have to stop hanging out with Worry and Doubt and make Faith our new best friend.”

Surgery day, and there Andrew is, still trying to muster a smile. For six hours we prayed and as Faith grew, the craniofaringioma, did indeed, disappear. The surgeon said they had got it all. It was the happiest 10 seconds of my life. That was the win. My son was alive, but the foul was Andrew was blind. At that moment, I realized, I was blind, too, because I had no clue what to do to help Drew. “The only thing worse than being blind is having sight, but no vision.” Helen Keller said that. At that moment, I remembered that quote, and that moment, I started learning a lot of life and leadership lessons.The first one was no peripheral distractions. You see, one day we held on to faith and Andrew woke up and he could see just a little bit of light, and the way he still sees. He’s blind in his right eye and he’s blind in the left peripheral, he sees as if looking through a little straw. I said, “Andrew, yes, you see this

The first one was no peripheral distractions. You see, one day we held on to faith and Andrew woke up and he could see just a little bit of light, and the way he still sees. He’s blind in his right eye and he’s blind in the left peripheral, he sees as if looking through a little straw. I said, “Andrew, yes, you see this this little column, but it doesn’t have to be a bad thing. No peripheral could be a great thing. You have a built in mechanism to just focus on what the goal straight ahead, because over here is worry, and over here is doubt.”

Lesson two, just focus on the goal and keep moving straight ahead one step at a time. Focus on the goal. Andrew wasn’t hearing it. He said, “That sounds all fine, but you’re not the seventh grader that gets bullied and picked on when you go to school. You’re not the seventh grader who has headaches and stays in and out of the hospital and bumps into things everywhere you go,” and then he would cry, and cry, and cry.

I couldn’t take it anymore, so I am just going to be honest, I snapped. I said, “I can’t take it anymore!” He was so depressed all the time, crying all day, every day. This was hard. I said, “You can’t live your life this way.” That winner’s mentality kicked in and I said, “You’re not going to do this. Stop it!” I put him on a plane and I put him on a train and I took him to the most congested place I could find, downtown New York City, Manhattan.

I put him on that plane and he stepped off, and he looked at all those people going left and right and he began to cry. “I don’t want to!” I said, “Stop it, Andrew!” “I don’t … what if I bump into people?” I said, “You listen to me, you’re going to get that cane, you’re going to look straight ahead, you’re going to follow behind me, and if people get in your way, you take that cane and you just swing it like this, Andrew. Just go! Just go! Keep on moving! Hurry up! I got tickets to The Lion King!” Sometimes, we have to face our fears. He did it, and we saw The Lion King, it was a great show. If you haven’t seen it, go.

The next thing we learned, sometimes true strength means asking for help. You see, most of us are very, very proud. When pride says, “Do it yourself, but wisdom says find someone who knows,” listen to your wisdom. You’re going to be very, very proud that you did. We found the Florida School for the Deaf and the Blind, where Andrew went on, in just that one year, he became valedictorian of his eighth grade class.

The fourth thing, don’t let things you can’t do over shadow the things you can. In your business world, in your personal world, you will find people, constantly, saying you can’t. The magic words, always, for winner’s mentality, is I can. Don’t let those things discourage you. They said you can’t play football, you can’t play basketball, I said, “Surely, there’s something you can play, Andrew.” He went on and he found goalball. It’s a paralympic sport for the blind. You can.

Number five, trust that, eventually, you’ll learn to survive your new normal. This is a big one, folks, because we’re in a world that is, constantly, changing. Change is, often, difficult. It’s, also, inevitable. You have to trust that you’re going to survive it, after all, every day is a new day and you’re still here, right? Most of you.

Lesson number six, one thing worse than losing your sight, truly, is losing your vision, and this was the big lesson. You see, sight to me is physical. It’s the here and now. Vision is spiritual. Sight is perception of your present. Vision is faith in your future.

The last lesson, you are significant. We’re living in a political time where everybody wants to matter. It’s just a core part of who we are, so passionately, play your position no matter how bad things get. Passionately play your position. You are significant. Ultimately, we’re here to lead and to serve everybody else. By doing that, we encourage others to do the same.

Andrew went on, he is now in his first semester, after he didn’t even want to go to school, he is now a freshman at Florida State University. Struggling like everybody else. The weird thing, his interest is now helping others with disabilities. You see how those fouls in your life, if you just trust, the vision will come back in and will lead you, directly, to your purpose.