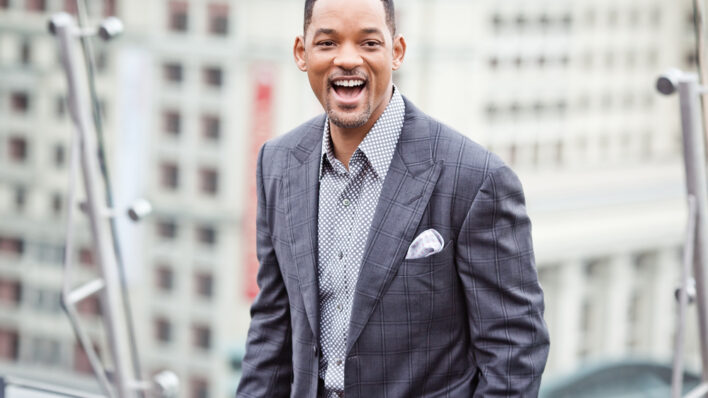 They say money can’t buy happiness. Though, if you had money like Will Smith does, you’d probably try to buy
By Joel Balsam    July 6, 2018

They say money can’t buy happiness. Though, if you had money like Will Smith does, you’d probably try to buy

They say money can’t buy happiness. Though, if you had money like Will Smith does, you’d probably try to buy some.

Still, the actor said despite the riches he’s earned over his long career – it’s something far more important which brings a smile to his face. Smith appeared on Tidal’s Rap Radar podcast to talk about his upcoming rap album and to preview a new song, “The Mountaintop.” Smith explained that the title of the track refers to how he’s managed to find happiness at 49 years young.

“The idea is… I’ve been to the top of money, I’ve had all the sex that I’ve ever wanted, I’ve had all of the adoration,” he said, according to Entertainment Tonight.

“I’ve been to the top of all those material world mountains and nothing makes you happy other than being useful to others. That’s it. That’s the only thing that ever will satisfy that thing, is that what you’re doing is useful.”

Smith isn’t always happy, contrary to what you might believe. Being that guy who always looks happy is exhausting – and he has cracked.

“I’ve maintained the character of Will Smith…[who] signs every autograph, is always happy, and wants to see the fans and that’s not actually authentic,” Smith said. “I do want to slap somebody every once in a while.”

In 2012, at the Men in Black 3 premiere in Moscow, Smith lost his cool when an annoying prankster, Vitali Sediuk, attempted to give him a kiss. On camera for the whole world to see, Smith slapped Sediuk across the face.

Still angry, Smith returned to his room and noticed 10 messages from Jay-Z.

“So I call him and say, ‘What’s up?’ He sounds winded,” Smith revealed in the podcast. “He said, ‘I just saw the video of you slapping the dude in Russia. I just want you to know you’ll never make a better piece of entertainment. It’s the funniest thing I’ve ever seen.’ He said, ‘Me and Bey, we got a show tonight, and we’re thinking about canceling it and just staying in and watching you slap this dude.’”

Despite being a platinum-selling recording artist, Smith has gotten flak for not being tough enough.

“That was a difficult time coming up. … It was always difficult [to hear] people say I was soft and my music was cotton candy,” he said in the interview.

So Smith has had to give himself permission to let the haters hate and keep on doing his thing.

“I always wanted to fight to prove myself. Fighting yourself to maintain positivity is the hardest fight you ever gon’ have. That struggle to just stay my course, be the person in the world that I wanted to be no matter what people said. I started to call it offensive positivity.”