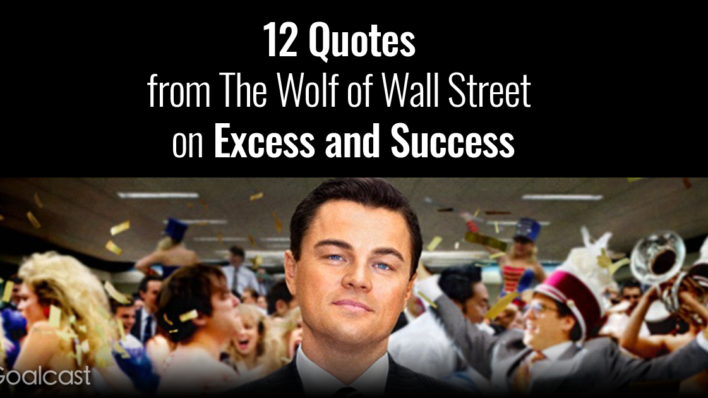 12 The Wolf of Wall Street Quotes on Excess and Success

Based on the true story of Jordan Belfort, The Wolf of Wall Street is an American biographical black comedy that
By Flavia Medrut    October 23, 2018

Based on the true story of Jordan Belfort, The Wolf of Wall Street is an American biographical black comedy that premiered on December 2013 under the excellent direction of Martin Scorsese.

The Wolf of Wall Street might be one of the craziest movies you’ll ever watch, if you haven’t already. The masterpiece depicts Jordan Belfort’s reckless adventures from his rise to a wealthy stock-broker to his free fall and imprisonment.

Leonardo DiCaprio stars as Belfort and as expected, he gave an outstanding performance on what living like a narcissistic lunatic means. The man wanted it all – riches, wilder experiences, pleasure and pain. His genius plan and predatory manipulations got him exactly what he wanted; his stupidity to think he could get away with it got him exactly what he deserved.

The Wolf of Wall Street shows us the fault in our existence. The effort and years we put into creating something just to ruin it in a matter of seconds.

Here are 12 The Wolf of Wall Street quotes on excess and success:

Let me tell you something. There’s no nobility in poverty. I’ve been a rich man and I’ve been a poor man. And I choose rich every f**king time. – Jordan Belfort

Still, give them to me young, hungry, and stupid. And in no time, I will make them rich. – Jordan Belfort

The only thing standing between you and your goal is the bullshit story you keep telling yourself as to why you can’t achieve it. – Jordan Belfort

It’s business. Leave your emotions at the door. – Jordan Belfort 97% of the people who quit too soon are employed by the 3% who didn’t. – Jordan Belfort

I want you to deal with your problems by becoming rich! – Jordan Belfort

You wanna know what money sounds like? Go to a trading floor on Wall Street. – Jordan Belfort

The real question is this: was all this legal? Absolutely f**king not. But we were making more money than we knew what do with. – Jordan Belfort