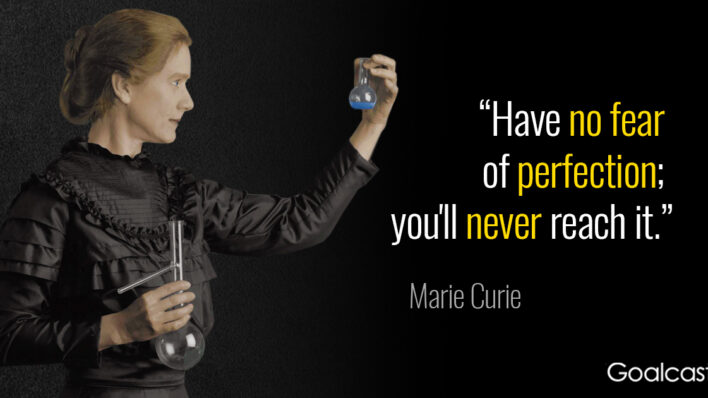 Marie Curie was the first woman to win a Nobel Prize in two different categories — physics and chemistry —
By Flavia Medrut    February 23, 2018 In a Victorian era where academic opportunities for women were very limited, Marie Curie actually studied in secret, as it was nearly impossible to be accepted in an academic world that belonged to men.

Along with her husband, Pierre Curie, who was also a great scientist, Curie discovered polonium and radium. After her husband’s death, she continued their research, which led to the further development of X-rays and the establishment of the field of radiation therapy for cancer.

Due to the permanent exposure to radiation, Marie Curie contracted leukemia and died in 1934, but she remains a role model and an inspiration for women in the scientific field.

Here are 14 Marie Curie quotes that will inspire you to strive for continuous self-improvement. Nothing in life is to be feared, it is only to be understood. Now is the time to understand more, so that we may fear less.

Have no fear of perfection; you’ll never reach it.

We must have perseverance and above all confidence in ourselves. We must believe that we are gifted for something and that this thing must be attained.

You cannot hope to build a better world without improving the individuals. To that end, each of us must work for our own improvement. I am one of those who think, like Nobel, that humanity will draw more good than evil from new discoveries.

I was taught that the way of progress is neither swift nor easy.

The older one gets, the more one feels that the present moment must be enjoyed, comparable to a state of grace.

One never notices what has been done; one can only see what remains to be done.

There are sadistic scientists who hurry to hunt down errors instead of establishing the truth.

I have frequently been questioned, especially by women, of how I could reconcile family life with a scientific career. Well, it has not been easy.

First principle: never to let one’s self be beaten down by persons or by events.

Humanity needs practical men, who get the most out of their work, and, without forgetting the general good, safeguard their own interests. But humanity also needs dreamers, for whom the disinterested development of an enterprise is so captivating that it becomes impossible for them to devote their care to their own material profit.

All my life through, the new sights of Nature made me rejoice like a child.