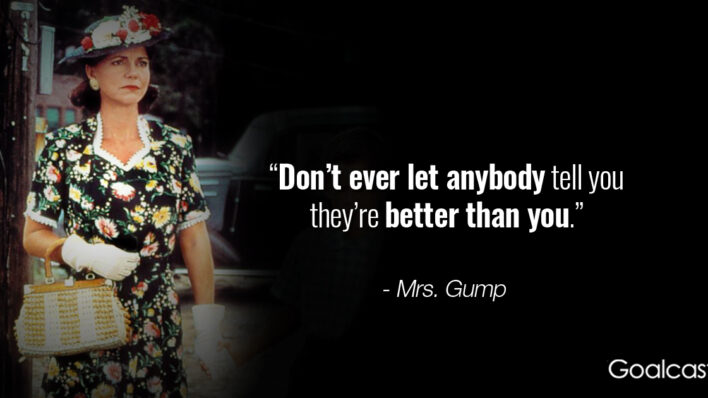 27 Forrest Gump Quotes that Will Change your Outlook on Life

The film has its origins in Groom’s novel, but some events and some of the character’s personality traits are described quite differently. Forrest Gump is a masterpiece with outstanding performances that remain etched in cinematographic history.

It’s hard to believe that Forrest Gump was released in 1994 and that it can have the same emotional impact even if you watch it ten times. Aside from depicting everyday drama that so many people can relate to, the movie itself is a major life lesson – we can always succeed if we believe in ourselves, but we also need someone to encourage and not give up on us when we’re in doubt.

Although Tom Hanks already had an impressive career as an actor, he undisputedly gained more fame by portraying Forrest – a kind-hearted boy with marginal intelligence, often bullied because of his physical disability and low IQ. Encouraged by his mother, Forrest eventually finds his way in life and proves that in spite of what anyone says he is capable of achieving success.

Even though not many show him kindness, Forrest keeps on being the good man his mother taught him to be, doesn’t let anything interfere with his happiness, helps whenever possible and never ceases to follow his dreams.

Besides being a commercial success, Forrest Gump serves as a true inspiration; it teaches us to never sink into a place that feels like there’s no hope left. The movie won six Academy Awards and due to its major impact, in 2011, was selected for preservation in the United States National Film Registry, as the Library of Congress described it as being “culturally, historically, or aesthetically significant”. My mama always said ‘Life is like a box of chocolate. You never know what you’re gonna get.’

You have to do the best with what God gave you.

I don’t know if we each have a destiny, or if we’re all just floatin’ around accidental-like on a breeze. But I, I think maybe it’s both.

My mama says that stupid is as stupid does.

Don’t ever let anybody tell you they’re better than you.

I’m not the smart man. But I know what love is.

Mama always said, dying was a part of life. I sure wish it wasn’t.

Forrest: What’s my destiny, Mama?
Mrs. Gump:You’re gonna have to figure that out for yourself.

Bubba was my best good friend. And even I know that ain’t something you can find just around the corner.

Now, mama said there’s only so much fortune a man really needs… and the rest is just for showing off.

My mama always told me that miracles happen every day. Some people don’t think so, but they do. Young Forrest: Um, nothing at all, thank you. My legs are just fine and dandy.

My mama always said you’ve got to put the past behind you before you can move on.

Dear God, make me a bird. So I could fly far. Far far away from here. – Young Jenny Curran

Me and Jenny goes together like peas and carrots. – Forrest

Have you found Jesus yet, Gump? – Lieutenant Daniel Taylor

I didn’t know I was supposed to be looking for him, sir. – Forrest

Mama always had a way of explaining things so I could understand them.- Forrest

My mama says they were magic shoes. They could take me anywhere. – Forrest

Listen, you promise me something, OK? Just if you’re ever in trouble, don’t be brave. You just run, OK? Just run away. –Jenny Curran

Now you wouldn’t believe me if I told you, but I could run like the wind blows. From that day on, if I was goin’ somewhere, I was runnin’! – Forrest

Mrs. Gump: You do your very best now, Forrest?

Young Forrest: I sure will, Momma

You can’t be doin’ this, Forrest. You can’t keep tryin’ to rescue me all the time. – Jenny Curran