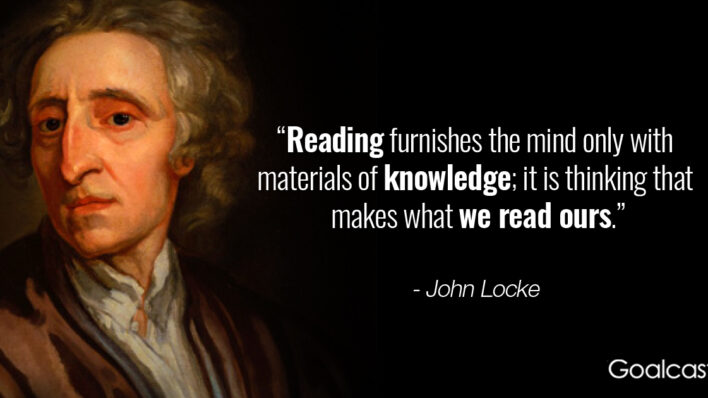 15 John Locke Quotes to Help you Think Without Prejudice

John Locke was an English philosopher and physician, widely known as the founder of empiricism and the “Father of Liberalism.”
By Flavia Medrut    June 15, 2018

John Locke was an English philosopher and physician, widely known as the founder of empiricism and the “Father of Liberalism.” Locke’s philosophy inspired both the European Enlightenment and the Constitution of the United States. His political philosophy was grounded in the importance of toleration between individuals and in the notion of the social contract, concerning the legitimacy of the authority of the state over the individual.

Locke’s theories inspired later philosophers such as Voltaire, Jean Jacques Rousseau, David Hume and Immanuel Kant. By defining the self through a continuity of consciousness, Locke suggested that all of our ideas and knowledge are determined only by experience (empiricism) and that individuals are born without built-in mental content.

As a physician, Locke had become a fellow of the Royal Society and along with Thomas Sydenham, conducted important research based on careful observation and firm evidence.

Here are 15 John Locke quotes to help you think without prejudice and become a more tolerant person. I have always thought the actions of men the best interpreters of their thoughts.

We are like chameleons. We take our hue and the color of our moral character, from those who are around us.

New opinions are always suspected, and usually opposed, without any other reason but because they are not common.

The great question which, in all ages, has disturbed mankind, and brought on them the greatest part of their mischiefs … has been, not whether be power in the world, nor whence it came, but who should have it.

To prejudge other men’s notions before we have looked into them is not to show their darkness but to put out our own eyes.

Few men think, yet all will have opinions. Hence men’s opinions are superficial and confused.

The only defense against the world is a thorough knowledge of it.

There is frequently more to be learned from the unexpected questions of a child than the discourses of men. Now, I appeal to the consciences of those who persecute, wound, torture, and kill other men on the excuse of ‘religion’, whether they do this in a spirit of friendship and kindness.

Our business here is not to know all things, but those which concern our conduct.

Reading furnishes the mind only with materials of knowledge; it is thinking that makes what we read ours.

To love truth for truth’s sake is the principal part of human perfection in this world, and the seed-plot of all other virtues.

Men being, as has been said, by nature, all free, equal and independent, no one can be put out of this estate, and subjected to the political power of another, without his own consent.

There are a thousand ways to wealth, but only one way to Heaven.

We are born to be, if we please, rational creatures, but it is use and exercise only that makes us so.