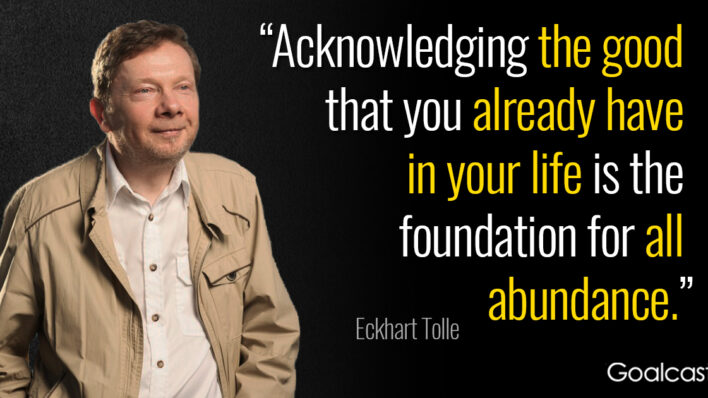 15 Eckhart Tolle Quotes to Make you Embrace the Present

Eckhart Tolle is a spiritual teacher and author known for his best-selling books The Power of Now and A New Earth:
By Flavia Medrut    March 28, 2018

Eckhart Tolle is a spiritual teacher and author known for his best-selling books The Power of Now and A New Earth: Awakening to your Life’s Purpose.

Tolle states that by the age of 29 he was mostly depressed and didn’t really have a purpose in life. He experienced an “inner transformation” that led to years and years of exploring and understanding his previous state of mind and what helped him overcome it. A spiritual author inspired and influenced by many religious teachings, Tolle says that “religions have become so overlaid with extraneous matter that their spiritual substance has become almost completely obscured”.

Maintaining a neutral position and focusing first on humanity, Eckhart Tolle believes that being spiritual doesn’t have to be about religious beliefs.

Here are 15 Eckhart Tolle quotes that have already helped millions of people around the world find inner peace. Some changes look negative on the surface but you will soon realize that space is being created in your life for something new to emerge.

Realize deeply that the present moment is all you have. Make the ‘now’ the primary focus of your life.

Life will give you whatever experience is most helpful for the evolution of your consciousness.

Acknowledging the good that you already have in your life is the foundation for all abundance.

Sometimes letting things go is an act of far greater power than defending or hanging on.

The primary cause of unhappiness is never the situation but your thoughts about it.

Anything that you resent and strongly react to in another is also in you.

Whatever you fight, you strengthen, and what you resist, persists.

People don’t realize that now is all there ever is; there is no past or future except as memory or anticipation in your mind.

All negativity is caused by an accumulation of psychological time and denial of the present.

In today’s rush we all think too much, seek too much, want too much and forget about the joy of just being. What a caterpillar calls the end of the world we call a butterfly.

Words reduce reality to something the human mind can grasp, which isn’t very much.

The power for creating a better future is contained in the present moment: You create a good future by creating a good present.