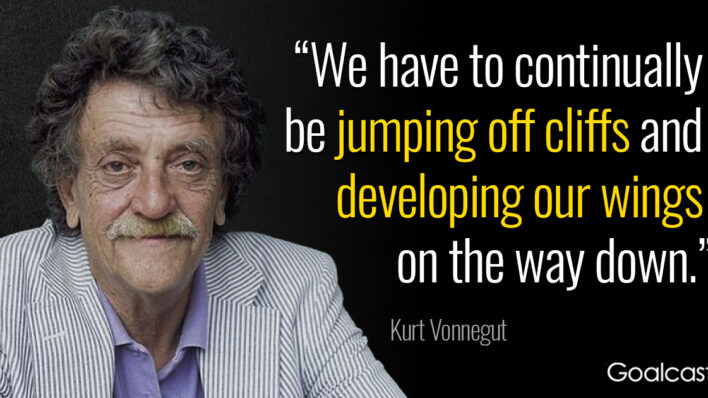 17 Kurt Vonnegut Quotes on Understanding the World We Live In

Kurt Vonnegut (November 11, 1922 – April 11, 2007) was an American writer who beautifully blended literature with science-fiction and humor. Each of Vonnegut’s novels reveals a unique world where happenings of the 20th century are presented with a touch of irony and revolve around unusual characters. Slaughterhouse-Five, Cat’s Cradle, and Breakfast of Champions are just three of the books that cemented his reputation.

Before attending University of Chicago, Kurt Vonnegut joined the U.S. army and fought in the Battle of the Bulge during World War II. He was caught and became a prisoner of war. Vonnegut managed to escape because he was working in an underground meat locker.

For his contributions to literature, Vonnegut was made a member of the American Academy of Arts and Sciences, and the Kurt Vonnegut Memorial Library was opened in Indianapolis in his honor.

Here are 17 Kurt Vonnegut quotes about being kind and noticing your joyful moments. I want to stand as close to the edge as I can without going over. Out on the edge you see all kinds of things you can’t see from the center.

We have to continually be jumping off cliffs and developing our wings on the way down.

If I should ever die, God forbid, let this be my epitaph: The only proof he needed for the existence of God was music.

Beware of the man who works hard to learn something, learns it, and finds himself no wiser than before.

There’s only one rule that I know of, babies — ‘God damn it, you’ve got to be kind.’

Being a humanist means trying to behave decently without expectation of rewards or punishment after you are dead.

And I urge you to please notice when you are happy, and exclaim or murmur or think at some point.

Maturity is a bitter disappointment for which no remedy exists, unless laughter could be said to remedy anything.

Science is magic that works.

If you can do no good, at least do no harm.

There is love enough in this world for everybody, if people will just look.

Wake up, you idiots! Whatever made you think that money was so valuable?

Give me knowledge or give me death! People have to talk about something just to keep their voice boxes in working order so they’ll have good voice boxes in case there’s ever anything really meaningful to say.

We’re terrible animals. I think that the Earth’s immune system is trying to get rid of us, as well it should.