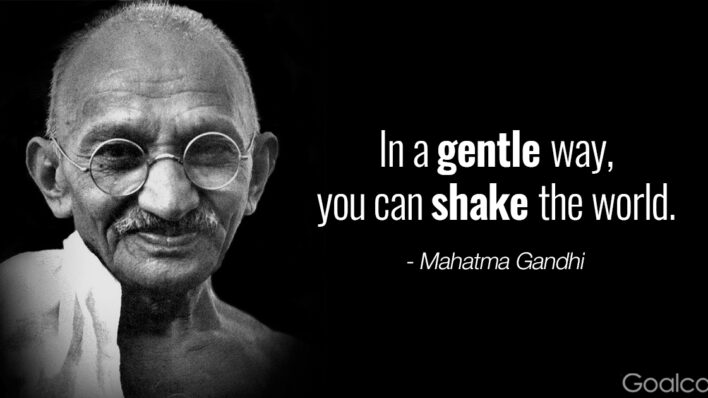 Inspiring quotes from Mahatma Gandhi. Gandhi was a non-violent, anti-colonial nationalist and is considered to be the Father of India’s independence.
By Goalcast    March 20, 2022

Inspiring quotes from Mahatma Gandhi. Gandhi was a non-violent, anti-colonial nationalist and is considered to be the Father of India’s independence.

Mahatma Gandhi is revered the world over as one of history’s most transformative and inspirational figures. Throughout his life in South Africa and India, Gandhi was a fearless advocate for the rights and dignity of all people. His constant and unwavering promotion of non-violence as a tool to win over hearts and minds has forever left its mark on the world.

However, the man known today for his calm, courage and compassion in the face of oppression was not always comfortable before the crowds. Born Mohandas Karamchand Gandhi in Porbandar, India in 1869 – he was later nicknamed “Mahatma,” for “great soul” – the spiritual leader and father of Indian independence in fact suffered for much of his life from an acute fear of public speaking. Mahatma Gandhi’s glossophobia, as it’s known, was so severe that when he faced a judge for his first court case as a young lawyer, he froze and fled from the courtroom in a panic.

Over time, Mahatma Gandhi managed not only to overcome his fears, but to turn them to his advantage. His unease at speaking made him an excellent listener, whose humility and empathy allowed him to channel the dreams and aspirations of the masses. His hesitancy with words taught him the power of saying more with less – and today, these words, inflected with the heart and wisdom that have made him an international icon, continue to inspire countless people across the globe.

One of the most popular phrases attributed to Gandhi is, “An eye for an eye leaves the whole world blind.” However, whether he was actually the one to say the words has been debated. Still, there are many wise quotes by Mahatma Gandhi that are worth sharing.

A ‘no’ uttered from the deepest conviction is better than a ‘yes’ merely uttered to please, or worse, to avoid trouble.

It is the quality of our work which will please God and not the quantity.

The only tyrant I accept in this world is the ‘still small voice’ within me.

RELATED: 60 Quotes About Strength To Help You Develop Resilience

If by strength is meant moral power, then woman is immeasurably man’s superior.

I do believe that, where there is only a choice between cowardice and violence, I would advise violence… I would rather have India resort to arms in order to defend her honor than that she should, in a cowardly manner, become or remain a helpless witness to her own dishonor. But I believe that nonviolence is infinitely superior to violence.

You may never know what results come of your actions, but if you do nothing, there will be no results.

If we could change ourselves, the tendencies in the world would also change. As a man changes his own nature, so does the attitude of the world change towards him. We need not wait to see what others do.

A man is but a product of his thoughts. What he thinks he becomes.

I will not let anyone walk through my mind with their dirty feet.

Nobody can hurt me without my permission.

Happiness is when what you think, what you say, and what you do are in harmony.

The weak can never forgive. Forgiveness is the attribute of the strong.

An ounce of practice is worth a thousand words.

A coward is incapable of exhibiting love; it is the prerogative of the brave.

Freedom is not worth having if it does not include the freedom to make mistakes.

Strength does not come from physical capacity. It comes from an indomitable will.

Gandhi Quotes To Inspire You

In a gentle way, you can shake the world.

Service which is rendered without joy helps neither the servant nor the served.

If we are to teach real peace in this world, and if we are to carry on a real war against war, we shall have to begin with the children.

The best way to find yourself is to lose yourself in the service of others.

The future depends on what you do today.

If I have the belief that I can do it, I shall surely acquire the capacity to do it even if I may not have it at the beginning.

Hate the sin, love the sinner.

Glory lies in the attempt to reach one’s goal and not in reaching it.

Whenever you are confronted with an opponent, conquer him with love.

Permanent good can never be the outcome of untruth and violence.

I cannot conceive of a greater loss than the loss of one’s self-respect.

You must not lose faith in humanity. Humanity is like an ocean; if a few drops of the ocean are dirty, the ocean does not become dirty.

To give pleasure to a single heart by a single act is better than a thousand heads bowing in prayer.

You don’t know who is important to you until you actually lose them.

I object to violence because when it appears to do good, the good is only temporary; the evil it does is permanent.

Forgiveness is more manly than punishment.