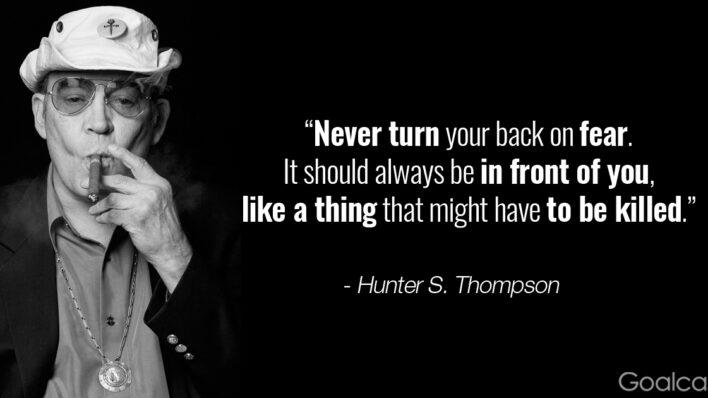 18 Hunter S. Thompson Quotes to Increase your Appetite for Life

A fearless American author, Hunter S. Thompson is the creator of the genre known as “Gonzo journalism,” which was basically
By Flavia Medrut    June 13, 2018

A fearless American author, Hunter S. Thompson is the creator of the genre known as “Gonzo journalism,” which was basically his own style of reporting and ended up turning him into a counterculture icon.

Thompson was born to be wild, and always had a distaste for authority. Ever since he was a child, the journalist built himself a reputation as a hooligan, getting arrested a few times. His habit of getting into trouble was also highlighted by alcohol and drug use.

His career as a journalist started while serving in the United States Air Force, but Thompson had shown great writing skills at a young age. While traveling the country to write for numerous magazines, he developed his own writing style, which he would use in his famous book Fear and Loathing in Las Vegas: A Savage Journey to the Heart of the American Dream.

Hunter S. Thompson is also the author of The Rum Diary, an autobiographical novel that was initially rejected by publishers. After seeing publication, the book became a national bestseller and was later turned into a movie starring Johnny Depp.

Here are 18 Hunter S. Thompson quotes that will make you enjoy life to the fullest. A man who procrastinates in his choosing will inevitably have his choice made for him by circumstance. For every moment of triumph, for every instance of beauty, many souls must be trampled.

I was not proud of what I had learned but I never doubted that it was worth knowing.

Life has become immeasurably better since I have been forced to stop taking it seriously.

Freedom is something that dies unless it’s used.

Some may never live, but the crazy never die.

I don’t see how you can respect yourself if you must look in the hearts and minds of others for your happiness.

I have a theory that the truth is never told during the nine-to-five hours.

Weird behavior is natural in smart children, like curiosity is to a kitten.

So we shall let the reader answer this question for himself: Who is the happier man, he who has braved the storm of life and lived or he who has stayed securely on shore and merely existed?

We cannot expect people to have respect for law and order until we teach respect to those we have entrusted to enforce those laws.

The edge… there is no honest way to explain it because the only people who really know where it is the ones who have gone over.

In a closed society where everybody’s guilty, the only crime is getting caught. In a world of thieves, the only final sin is stupidity.

Morality is temporary, wisdom is permanent.

The greatest mania of all is passion: and I am a natural slave to passion.

Too weird to live, too rare to die!

Never turn your back on fear. It should always be in front of you, like a thing that might have to be killed.