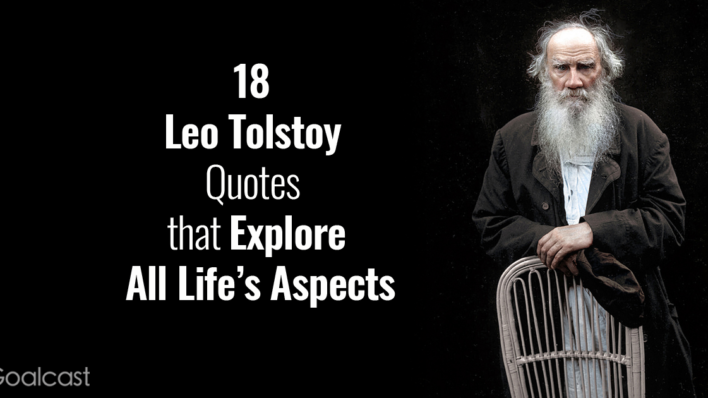 Best known for his two longest works, War and Peace and Anna Karenina, Leo Tolstoy (in full Lev Nikolayevich Tolstoy) was a Russian writer who is regarded as one of the greatest authors of all time.

Born in 1828, Leo Tolstoy came from an aristocratic Russian family, and though you probably imagine him living a luxurious life, he rather experienced a painful one. His mother died before he was two years old, his father when he was 9, and his grandmother passed away shortly after his father.

Tragedy didn’t stop there. His next guardian also died in 1941 so he was transferred to the care of another aunt.

Despite being surrounded by the death of his loved ones, Leo tried to preserve the happiest moments from his childhood. His much appreciated work is often described as a piece of life and he was known to be the type that would gaze into one’s eyes just to understand their unspoken thoughts.

Tolstoy had a profound influence on other great personalities like Mahatma Gandhi and Martin Luther King. Here are 18 Leo Tolstoy quotes that explore all life’s aspects.

Wrong does not cease to be wrong because the majority share in it.

Truth, like gold, is to be obtained not by its growth, but by washing away from it all that is not gold. It is amazing how complete is the delusion that beauty is goodness.

Only people who are capable of loving strongly can also suffer great sorrow, but this same necessity of loving serves to counteract their grief and heals them.

If you want to be happy, be.

Rummaging in our souls, we often dig up something that ought to have lain there unnoticed.

If you look for perfection, you’ll never be content.

You can love a person dear to you with a human love, but an enemy can only be loved with divine love.

Let us forgive each other – only then will we live in peace.

If one loves anyone, one loves the whole person, just as they are and not as one would like them to be…

I often think that men don’t understand what is noble and what is ignorant, though they always talk about it.

The changes in our life must come from the impossibility to live otherwise to the demands of our conscience not from our mental resolution to try a new form of life.

Each person’s task in life is to become an increasingly better person.

It’s not given to people to judge what’s right or wrong. People have eternally been mistaken and will be mistaken, and in nothing more than in what they consider right and wrong.

There is no greatness where simplicity, goodness, and truth are absent.

In the name of God, stop a moment, cease your work, look around you!