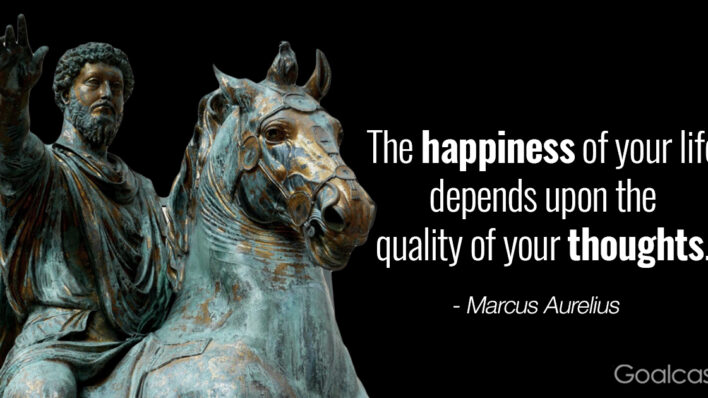 Quotes from Marcus Aurelius on life, death and stocism. One of the most famous Roman emperors and the author of Meditations.
By Flavia Medrut    May 11, 2022

Quotes from Marcus Aurelius on life, death and stocism. One of the most famous Roman emperors and the author of Meditations.

The last of the so-called “five good emperors,” Marcus Aurelius kept the Roman Empire safe from the Parthians and Germans between the years 161-180.

One of the most respected Roman emperors, Marcus Aurelius is best remembered for his rule driven by reason and his intellectual interest in Stoicism – a philosophy of personal ethics informed by its system of logic.

In brief, Stoicism teaches us that by self-restraint, people can develop clear judgment and inner calm. It also emphasizes the fact that the path to happiness is accepting the present moment as it is.

Influenced by Epictetus, Marcus Aurelius has written one of the greatest works of philosophy – Meditations. This series of personal writings consists of 12 books and is filled with personal notes and ideas on Stoicism.

The death of Marcus Aurelius is considered to be the end of Pax Romana, and eventually the fall of the Western Roman Empire.

Here are the Best Marcus Aurelius Quotes About Life, Death, Stoicism and Leadership

The happiness of your life depends upon the quality of your thoughts.

When you arise in the morning think of what a privilege it is to be alive, to think, to enjoy, to love…

Life is short — the fruit of this life is a good character and acts for the common good.

Everything that happens, happens as it should, and if you observe carefully you will find this to be so.

To live the good life: We have the potential for it. If we can learn to be indifferent to what makes no difference.

How ridiculous and how strange to be surprised at anything which happens in life.

Live out your life in truth and justice, tolerant of those who are neither true nor just.

We live only now. Everything else is either passed or is unknown.

The best revenge is to be unlike him who performed the injury.

It is the person who continues in his self-deception and ignorance who is harmed.

To love only what happens, what was destined. No greater harmony.

No man can escape his destiny, the next inquiry being how he may best live the time that he has to live.

Do not act as if you were going to live ten thousand years. Death hangs over you. While you live, while it is in your power, be good.

Think of yourself as dead. You have lived your life. Now, take what’s left, and live it properly.

Stop whatever you’re doing for a moment and ask yourself: ‘Am I afraid of death because I won’t be able to do this anymore?’

Brief is man’s life and small the nook of the Earth where he lives; brief, too, is the longest posthumous fame, buoyed only by a succession of poor human beings who will very soon die and who know little of themselves, much less of someone who died long ago.

About death: Whether it is a dispersion, or a resolution into atoms, or annihilation, it is either extinction or change.

Let each thing you would do, say, or intend, be like that of a dying person.

Remember: Matter. How tiny your share of it. Time. How brief and fleeting your allotment of it. Fate. How small a role you play in it.

It is not death that a man should fear, but he should fear never beginning to live.

What we do now echoes in eternity.

The memory of everything is very soon overwhelmed in time.

But death and life, honor and dishonor, pain and pleasure — all these things, equally happen to good men and bad, being things which make us neither better nor worse. Therefore they are neither good nor evil.

Stay calm and serene regardless of what life throws at you.

Reject your sense of injury and the injury itself disappears.

Here is a rule to remember in future, when anything tempts you to feel bitter: not ‘This is misfortune,’ but ‘To bear this worthily is good fortune.’

Accept whatever comes to you woven in the pattern of your destiny, for what could more aptly fit your needs?

Look well into thyself; there is a source of strength which will always spring up if thou wilt always look.

Confine yourself to the present

Epithets for yourself: upright, modest, straightforward, sane, cooperative, disinterested… Maintain your claim to these epithets — without caring if others apply them to you or not.

If you are distressed by anything external, the pain is not due to the thing itself, but to your estimate of it; and this you have the power to revoke at any moment.

Do not indulge in dreams of having what you have not, but reckon up the chief of the blessings you do possess, and then thankfully remember how you would crave for them if they were not yours.

Because a thing seems difficult for you, do not think it impossible.

Make sure you’re not made ‘Emperor,’ avoid that imperial stain. It can happen to you, so keep yourself simple, good, pure, saintly, plain, a friend of justice, god-fearing, gracious, affectionate, and strong for your proper work.

It is the responsibility of leadership to work intelligently with what is given, and not waste time fantasizing about a world of flawless people and perfect choices.

A real man doesn’t give way to anger and discontent, and such a person has strength, courage, and endurance—unlike the angry and complaining. The nearer a man comes to a calm mind, the closer he is to strength.

No random actions, none not based on underlying principles.

Whenever you are about to find fault with someone, ask yourself the following question: What fault of mine most nearly resembles the one I am about to criticize?

Let men see, let them know, a real man, who lives as he was meant to live.

A man’s worth is no greater than the worth of his ambitions.

You have power over your mind — not outside events. Realize this, and you will find strength.

Dwell on the beauty of life. Watch the stars, and see yourself running with them.

The happiness of your life depends upon the quality of your thoughts.

Waste no more time arguing about what a good man should be. Be one.

If you are distressed by anything external, the pain is not due to the thing itself, but to your estimate of it; and this you have the power to revoke at any moment.

Accept the things to which fate binds you, and love the people with whom fate brings you together, but do so with all your heart.

The soul becomes dyed with the color of its thoughts.

Never let the future disturb you. You will meet it, if you have to, with the same weapons of reason which today arm you against the present.

If someone is able to show me that what I think or do is not right, I will happily change, for I seek the truth, by which no one was ever truly harmed. It is the person who continues in his self-deception and ignorance who is harmed.

I have often wondered how it is that every man loves himself more than all the rest of men, but yet sets less value on his own opinion of himself than on the opinion of others.

Very little is needed to make a happy life; it is all within yourself in your way of thinking.

The object of life is not to be on the side of the majority, but to escape finding oneself in the ranks of the insane.

Today I escaped from the crush of circumstances, or better put, I threw them out, for the crush wasn’t from outside me but in my own assumptions.

How much time he gains who does not look to see what his neighbor says or does or thinks, but only at what he does himself, to make it just and holy.

The first rule is to keep an untroubled spirit. The second is to look things in the face and know them for what they are.

How much more grievous are the consequences of anger than the causes of it.