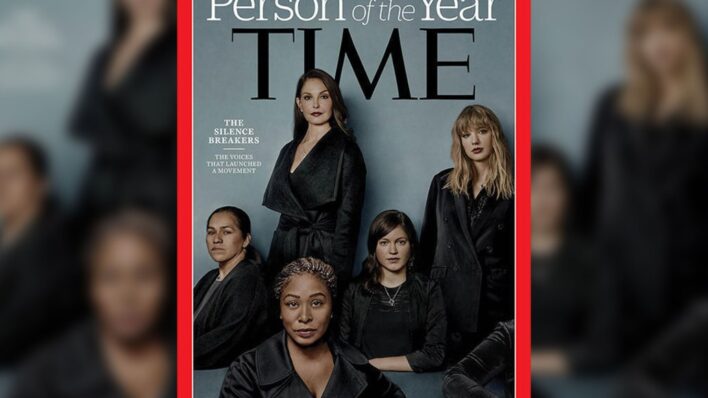 Following a controversial shortlist, TIME magazine has announced this year’s person of the year in a move that many are
By Eliza Theiss    December 8, 2017 Following a controversial shortlist, TIME magazine has announced this year’s person of the year in a move that many are hailing not only as revolutionary, but as a perfect ending to 2017.

Dubbed “the silence breakers”, the women and men that have come forward with disturbing – and disturbingly common – stories of workplace sexual harassment have been named “person of the year”, giving renewed effort and energy to the massive social movement.

2017: A year of great shift in attitudes and mentality

A year of great shifts in attitudes and mentality, 2017 has seen sweeping revelations of sexual harassment throughout the world.

From some of the most famed names in Hollywood to everyday women and men, October saw dozens, then hundreds, then hundreds of thousands join a movement that started in ‘00s, revealing painful instances of workplace harassment and assault.

Often anonymously, sometimes publicly in the media, the #MeToo movement was joined by millions around the world, sparking marches, new legislative initiatives, extensive media coverage and one of the most widespread social media engagements ever.

The origins of the #MeToo hashtag

First used in the ‘00s by social activist Tamara Burke in an effort to spark solidarity among young survivors of sexual assault, the #metoo phrase sparked a global conversation after actor Alyssa Milano tweeted it on Oct. 15, in the wake of widespread accusation of sexual misconduct and assault by now-disgraced film producer Harvey Weinstein.

Accompanied by a call to arms that read “If you’ve been sexually harassed or assaulted, write ‘me too’ as a reply to this tweet”, the hashtag spread like wildfire online, encouraging countless individuals around the world to bravely come forward with their own stories, often risking vicious online attacks.

If you’ve been sexually harassed or assaulted write ‘me too’ as a reply to this tweet. pic.twitter.com/k2oeCiUf9n

Many joined in anonymously, fearing workplace backlash and damage to their careers and livelihoods – as well as their families’ –, further illustrating the need for the long-overdue focus.

The far-reaching repercussions and backlash many accusers face were further illustrated on Time magazine’s cover, where one of the many “silence breakers” is pictured anonymously.

The unnamed elbow and what it stands for

With only her right arm included in the cover shot, a young hospital worker from Texas still felt the need to take part in the watershed movement to show other individuals in similar positions that there is a place and a supportive audience for their stories.

To show that times may be finally changing, that survivors will not be silenced and that the days of perpetrators being protected may finally be over. That arm represents all of us anonymous faces and voices in the crowd.  As many have remarked, we all are Time’s person of the year.

My absolute favorite part of this @TIME cover is the unnamed elbow in the lower corner. She’s everyone else. That’s our arm.
We all made the cover.#silencebreakers pic.twitter.com/wXDa41skka

Message of hope for the future

While we may be far from ending the heinous practice in our communities – local or global –, Time magazine’s recognition of the “silence breakers” as the most influential people of 2017 marks an important milestone in the fight against sexual harassment. And illustrates that a few voices, or even just one, can truly change the world.