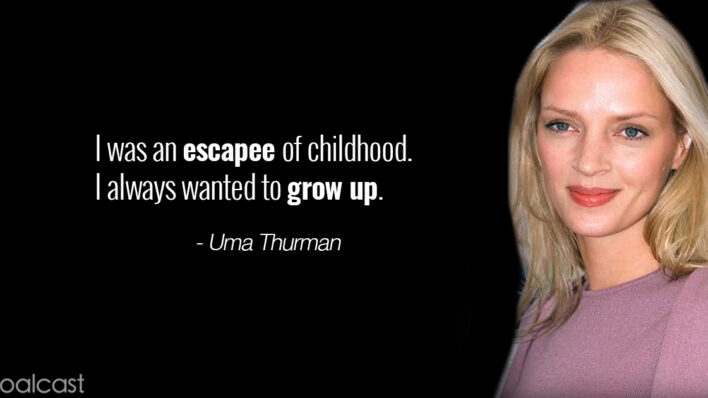 23 Uma Thurman Quotes to Make You Regain Your Confidence

Uma Karuna Thurman, born April 29, 1970, is an American actress and model; but you already knew that. What you

Uma Karuna Thurman, born April 29, 1970, is an American actress and model; but you already knew that. What you Uma Karuna Thurman, born April 29, 1970, is an American actress and model; but you already knew that. What you may not know though, is the meaning of her name. In Sanskrit, Uma means “splendor, light” while Karuna stands for “compassion, empathy”, words that turned out to define the person she was to become.

Thurman is considered Quentin Tarantino’s muse, breathing life into some of his most memorable characters, be it by kicking some serious ass in Kill Bill, showing us her cool dance moves in Pulp Fiction, or by keeping us away from drugs. And have you seen My Super Ex-Girlfriend? Uma Thurman’s talent and efforts have been rewarded with many nominations and awards, including a Golden Globe for Best Actress in a Television Film.

As a child though, Uma Thurman used to be teased for her height, for her weight, for having large feet or an angular bone structure, and she was repeatedly told that she needs a nose job. You wouldn’t think that such a gorgeous actress had to put up with this, while struggling with body dysmorphia and her own introverted nature. Her name was also considered unusual… at least now we know what it means.

Nonetheless, Uma Thurman is an inspiration for all of us. She is involved in countless philanthropic and activist causes, enriching the lives of children in Africa born in poverty. She also supports the ethical treatment of animals and even traveled to Southern Africa to assist and help in relocating the threatened species of Black rhinoceros.

Here are 23 Uma Thurman quotes to make you regain your confidence and move forward with love for your new self:

I spent the first fourteen years of my life convinced that my looks were hideous. Adolescence is painful for everyone, I know, but mine was plain weird.

But I think it is always difficult to have high expectations of yourself or anyone else.

I used to be more paranoid and stressed, constantly worrying about my Plan B. But the truth is I don’t have one.

I love and adore being a mother. It’s the greatest gift I’ve ever been given.

I’ve learned that every working mom is a superwoman.

And also I think particularly as a female, you’re taught to be defensive your whole life. You’re taught not to be aggressive.

I had to go to a mirror and look at it. I couldn’t picture myself in my own head. I had no image beyond a stick figure. I wasn’t a mean person as a kid, or dumb, and something has to be said to justify excluding you. I was an escapee of childhood. I always wanted to grow up.

Modeling is basically ‘Buy more stuff! Don’t you want some more stuff? It will make you look ten years younger and men will like you!’ If I’d wanted to be a salesperson, I would have got a job selling

I was not particularly bright, I wasn’t very athletic, I was a little too tall, odd, funny looking, I was just really weird as a kid.

I still love the people I’ve loved, even if I cross the street to avoid them.

Boredom is a great motivator.

You know what daring really is to me? It’s maybe much simpler: the willingness to get up and try it again. It’s not about whether or not you fall down, it’s how you get back up. And I’ve taken quite a few tumbles, myself. I do think that what’s wonderful in life is that we gain perspective as we take on different roles that are mind and heart opening.

It is technically a failure when you don’t try.

Daring to me is having courage; it’s a daily meditation to take breath and find strength.

That’s when you know you’ve found somebody special. When you can just shut up for a minute and comfortably enjoy the silence.

Change is usually preceded by some kind of drift.

It’s taken me a long time to learn to accept the risks and just be willing to try it over and over again.

Reading recent history is good to humble yourself, and also to feel some hopefulness that there is progress.

I certainly know I have been blessed with much more empathy than I ever knew I would feel for other people.

The argument about marriage equality will one day seem as arcane and shocking to us as the fact that Rosa Parks had to get up and go to the back of the bus. 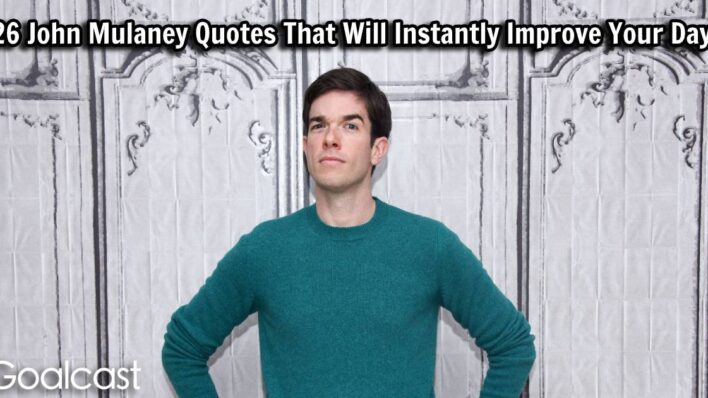 26 John Mulaney Quotes That Will Instantly Improve Your Day