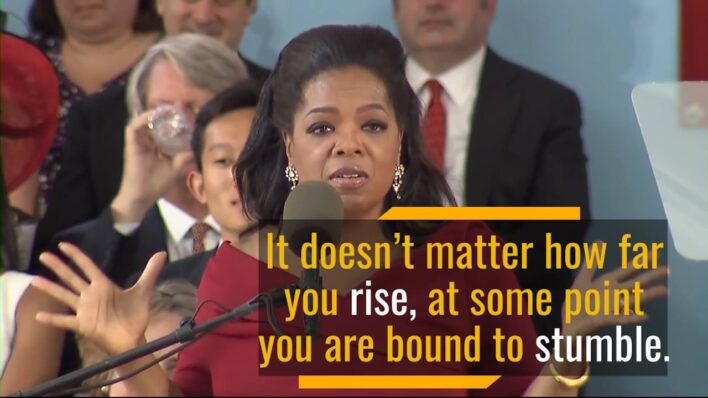 Oprah Winfrey: I Was Embarrassed

Oprah Winfrey​ – Make a Difference In her speech, Oprah explains how adversity is part of the human experience and
By Goalcast    August 19, 2017

Oprah Winfrey​ – Make a Difference In her speech, Oprah explains how adversity is part of the human experience and

In her speech, Oprah explains how adversity is part of the human experience and how it is important to believe in yourself in order to overcome them.

It doesn’t matter how far you might rise, at some point you are bound to stumble. Because if you’re constantly doing what we do, raising the bar, if you’re constantly pushing yourself higher, higher, the law of averages, not to mention the myth of Icarus, predicts that you will at some point fall. A few years ago I decided, as you will at some point, that it was time to recalculate. Find new territory, break new ground. I ended the show, and launched OWN, the Oprah Winfrey Network. The initials just worked out for me.

One year later after launching OWN, nearly every media outlet had proclaimed that my new venture was a flop. Not just a flop, but a big, bold flop, they call it. I can still remember the day I opened up USA Today and read the headline, “Oprah not quite standing on her OWN.” There is no such thing as failure. Failure is just life trying to move us in another direction. Now, when you’re down there in the hole, it looks like failure.

This past year, I had to spoon-feed those words to myself. Here’s the key. Learn from every mistake, because every experience, encounter, and particularly your mistakes are there to teach you and force you into being more of who you are. Then figure out what is the next right move. The key to life is to develop an internal, moral, emotional GPS that can tell you which way to go. You may stumble, fall, you will for sure, count on this, no doubt you will have questions. You will have doubts about your path. I know this. If you’re willing to listen, to be guided by that still, small voice that is the GPS within yourself, to find out what makes you come alive, you will be more than okay. You will be happy. You will be successful. You will make a difference in the world.