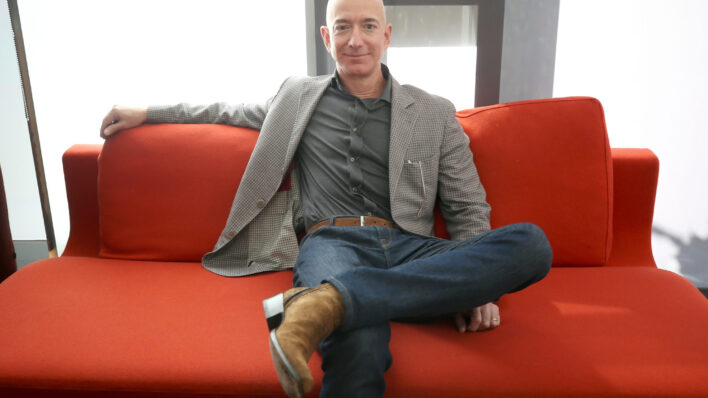 As a digital nomad and journalist, I travel the world while logging around 70 articles a month. To effectively manage
By Lindsay Tigar    October 18, 2018 Remarkably, all from an idea he built from his parent’s basement in the early 90s, the founder of Amazon, is currently the richest man… ever.

Unlike many executives who reach this level of success, Bezos is still the chairman and CEO of the company, a topic that is frequently debated and criticized. His leadership skills have often been questioned, since he has developed a reputation for being a difficult and hot-headed manager.

Even so, there is no denying his strategy and patience, building the fame and fortune of his brainchild gradually—acquiring and creating other companies along the way. From developing the aerospace company Blue Origin to acquiring The Washington Post in cash, his estimated $150 billion net worth is likely, just beginning to build.

Though Bezos tends to lean on the quieter side by maintaining his private life, he has revealed a few habits through various interviews.

He takes his time in the morning.

While some folks tend to be the type who are up-and-at-’em from the moment they jump out of bed, Bezos adopts a slower start to his day. Or as he put it once “I like to putter in the morning.”

He shared he tries to match his rise with the sun, never setting an alarm clock, but allowing himself to wake naturally. Then, he will spend time reading the news and enjoying breakfast with his wife of 25 years and their four children.

If you’re not exactly the type to wake up several hours before you need to, the idea of casually lounging before heading into the office could sound painful. However, psychologists stand by the Bezos method, articulating the benefits of enjoying the beginning of our days, instead of rushing through them.

If you stumble out of bed, anxious about making a meeting or barely giving yourself time to grab a cup of coffee, the rest of your day will carry anxiety. To try this approach, don’t set your alarm clock ahead two hours earlier and expect to be happy. Instead, try gradually waking up 15 minutes earlier until you reach a comfortable time for your lifestyle.

He takes all important meetings before lunch—and keeps them small.

Ask any expert on productivity and they’ll be first to explain the key to staying on track is tackling the most difficult tasks first-thing. After all, we can all be guilty of procrastinating to the very-last-second—sometimes, even on an important deadline.

Bezos tries to steer himself away from this temptation by scheduling all important and intense meetings before lunchtime. He noted this is usually a 10 a.m. check-in, after he’s spend the morning relaxing with his loved ones.

He also keeps any groups small, enforcing the ‘Two-Pizza Team’, meaning if those on the invite list couldn’t be fed with two pies, there are too many cooks in the kitchen. His culinary-inspired perspective is backed by science, which concluded the leaner the gathering, the more effective and efficient they’ll be.

He washes his own dishes.

Bezos’s wife never weighed in on her perspective, but he once shared the ‘sexiest thing he does’ is washing the dishes after dinner. Considering Bezos could not only afford, say, thousands of dishwashers or perhaps, even buy their manufacturer, he chooses to maintain this chore.

The verdict isn’t out on why he does this, but scrubbing and rinsing could have surprising benefits, according to a few studies. One discovered those who took on this task felt less stressed and more inspired, while another concluded mindless tasks actually ignite the portion of our brain that dictates creative problem-solving.

Perhaps it was while cleaning up after a serving of meatloaf that he wondered what Alexa would have to say?

He gets eight hours of sleep.

Even if you work out regularly, eat a colorful array of fiber and vitamin-rich veggies, and overall, maintain a positive attitude—if you aren’t sleeping, you’re in trouble. Or rather, you won’t be in the best mental tip-top shape to make important choices day-in and day-out.

This fact alone is why Bezos tries to collect eight hours of shut-eye each and every night. He once shared he prioritizes this lifestyle habit, since he tends to think better, have more energy and be in a brighter mood when he has enough rest. “As a senior executive, you get paid to make a small number of high-quality decisions,” he once shared.

So being grumpy and irritable because you’re thinking about a nap? Not the best frame of brain.

He’s able to think in the long-term.

If you can think back to the primal day of Amazon, this site started as a book reseller. Over time, he watched the progression of his business to inform his decisions, even suffering from financial pitfalls to advance his long-term vision.

He knew—one day—an electronic reader would be successful, so he pushed his customers in that direction, eventually creating the Kindle. Within companies—and frankly, with life—the ability to see the big picture or to envision years and decades ahead benefits strategy making, and ultimately, makes you a more fearless leader and human. After all, of all the aspects of your life that bring you joy, those you risked the most for always rise to the top.