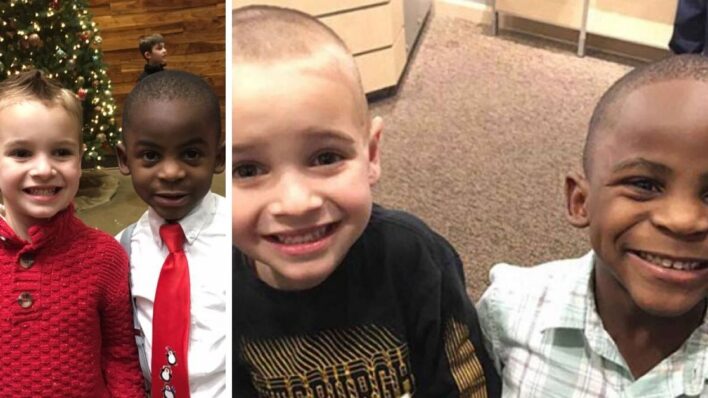 Jax and Reddy got matching haircuts to confuse their teacher but their heartwarming story is a touching reminder that we can all see beyond our differences.

Jax and Reddy got matching haircuts to confuse their teacher but their heartwarming story is a touching reminder that we can all see beyond our differences.

Right now, America feels like it’s more divided than it’s been in a long time but sometimes it only takes the innocent mind of a child to remind us of just how much we have in common, if we look past differences.

Take for example Lydia Rosebush’s 5-year-old son, Jax, who mentioned that he wanted a matching haircut with his best friend Reddy because they hoped to trick their teacher into not being able to tell them apart.

He said he couldn’t wait to go to school on Monday with his hair like Reddy’s so that his teacher wouldn’t be able to tell them apart. He thought it would be so hilarious to confuse his teacher with the same haircut.

This is a picture of the two boys, below.

For Lydia, this was a precious lesson in how racism is something that is acquired, not something we are born with.

If this isn’t proof that hate and prejudice is something that is taught I don’t know what is. The only difference Jax sees in the two of them is their hair.

Jax and Reddy saw beyond their differences

Both Jax and Reddy had no idea that they were different, so much that they believed only a haircut was needed to truly turn them into twins. They just saw their similarities. Imagine how much easier dialogue between adults could be if we could learn to see what we have in common instead of what makes us different?

The post has gone viral, and we can only hope it continues to inspire others to make better choices when interacting and learning from one another.

We can all learn a valuable lesson from these two amazing little boys. If these little boys can see each other in this way, isn’t it time the rest of us can as well?