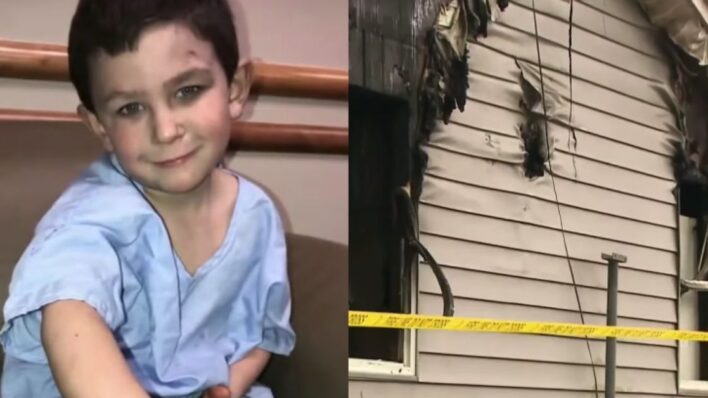 Noah Woods is only 5-years old but that did not stop him from saving his family from a house fire that could have ended in a tragedy.
By Aly Walansky    February 17, 2020

Noah Woods is only 5-years old but that did not stop him from saving his family from a house fire that could have ended in a tragedy.

Noah Woods is only five years old, but that didn’t stop him from risking everything to save his family when they were in danger.

The Georgia boy was one of the 8 members of his family who were asleep at their Bartow County home in Georgia on a Sunday when a fire started. He woke up to notice the flames and smoke in the bedroom he shared with his 2-year-old sister.

Noah didn’t hesitate for a second

It’s easy to imagine that a child would have been paralyzed with fear in such a horrifying scenario but not Noah. He immediately grabbed his sister and jumped out the open window, bringing them both to safety.

But he didn’t stop there. Noah went back to rescue another dearly loved member of his family. He went back into the house, braving the fire a second time, and came out with his dog before running next door to wake up his uncle and get help.

Every single member of the family ended up getting out safely.

Why this is exceptional

“We’ve seen children alert their families before,” Bartow County Fire Department Chief Dwayne Jamison told CNN. “But for a 5-year-old to be alert enough to do this … that’s pretty extraordinary.”

According to Jamison, the fire was started by an overloaded electrical outlet in Noah’s bedroom. Firefighters soon arrived, and treated Noah and four other family members for minor burns and smoke inhalation.

“By the grace of God, all nine of our loved ones were able to get out of our home,” Noah’s grandfather David Woods said in a GoFundMe post. “If it wasn’t for Noah, we may not be here today.”

As grateful as the family is to be alive, they are trying now to pull themselves together after the destruction of the home, and the family has asked the community for help while they get back on their feet.

In the meantime, Noah is set to receive a honorary Bartow County firefighter title and a lifesaving award.

No one is ever too insignificant to make a change

Never think that because you are young or small, you can’t make a difference or be of help. Thanks to one five-year-old very brave little boy, a whole family has survived what could have been a horrifying tragedy.

Noah showed exceptional courage but also empathy by going back for his dog without thinking twice about it. That is something we can all learn from. We all have that potential to be heroes. We just have to answer the call when it comes.