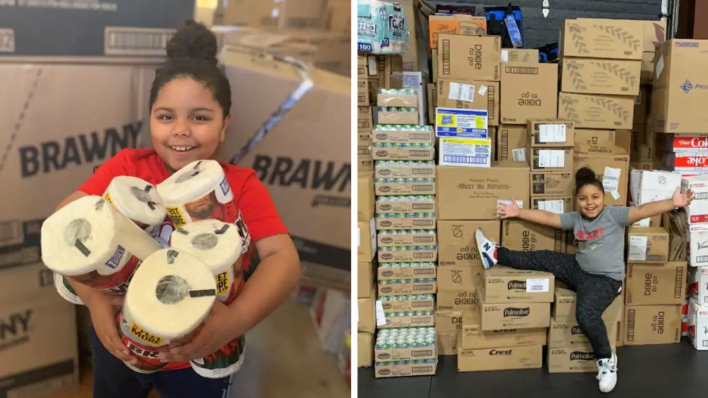 A boy who was bullied at school crushed it with kindness. Now he’s on a mission to help those in
By Bryan Liquor    December 29, 2020

A boy who was bullied at school crushed it with kindness. Now he’s on a mission to help those in need and spread the power of positivity.

Seven-year-old Cavanaugh Bell of Gaithersburg, Maryland, still remembers the pain of being picked on.

“I was bullied for working faster than others,” he told People. “At one point I asked my mom if she would be sad if I died.”

However, instead of bottling up the hurt, he channeled his pain into purpose and positive impact. Using his own savings, Bell started putting together and distributing care packages containing food and other essentials to his elderly neighbors in need during COVID.

It turns out that making smiles can be pretty addictive.

The more I gave back to my community, the more I wanted to keep doing it

Recruiting his mom, Llacey Simmons, to help “spread love and positivity”, Bell created a GoFundMe page to promote his cause.  Donations poured in.

Thanks to a space offered by a local gym, Bell kicked off the “LOVE is greater than COVID-19” Community Pantry. With the extra space, he was able to not only keep more seniors safe, but also spread the good vibes beyond his community.

Bell remembered a road trip to Mt. Rushmore with his mom, when they passed through the Pine Ridge Indian Reservation, considered one of the poorest areas in America.

She had told him that some were without electricity or running water. Worse, the population is stricken with high rates of alcoholism and suicide. For Bell — also part Native American — that was unacceptable.

With the help of his mom and scores of generous donors, he hired a driver and loaded up a 53-foot truck chalk full of clothing and essentials for the people of Pine Ridge.

For seven-year-old Bell, the mission is simple. “I’m just trying to make them have a big fat smile on their face.”

A mission to end bullying

And it’s just the beginning.

Bell also founded his own non-profit called Cool and Dope, where he sits as its Chief Positivity Creator.

Bell has set the ambitious goal to end all bullying worldwide by 2030. At this point, is there any reason to doubt him?

Cavanaugh believes he can save the world, and I believe him! He doesn’t see anything as a challenge and that’s what I love about his innocence

Bell’s organization has raised over $30,000, and has helped over 10,000 people with food and essential COVID supplies.

And to think it all started with a moment of empathy during his darkest time. Who else might be feeling this way, and how can I help?

Bell’s response to injustice proves that acts of kindness, once set in motion, can be an unstoppable force.

I just wanna teach people they can have an impact no matter their age — no matter if you’re 8, 10, or even my grandma’s age, 74 — you can do anything!