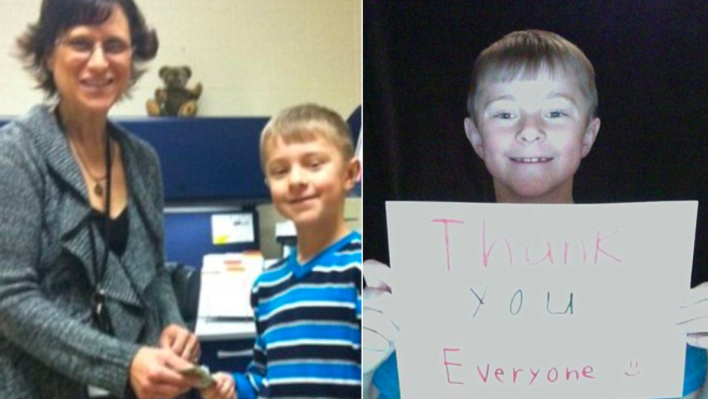 Refusing to see a friend turned away at the cafeteria, one boy with a heart of gold took matters into his own hands and the world took notice.
By Bryan Liquor    January 6, 2023

Refusing to see a friend turned away at the cafeteria, one boy with a heart of gold took matters into his own hands and the world took notice.

We often hear about how mean kids at school can be to each other. Yet they also have a strong sense of right and wrong and are often quick to stick up for each other.

An example of this took place at Challenger Elementary School. Per ABC, 8-year-old Cayden Taipalus was in line at its cafeteria when he saw something that turned his stomach. In front of him, his friend was refused a hot meal because there was no money left in his lunch account.

Seeing his friend having to put his hot meal down upset Taipalus and gave him the motivation to act. What he’d do next is incredible and something we grown-ups can all learn from.

Kids can also be remarkably simple when it comes to solutions. And so, Taipalus figured that if lack of money was why his friends couldn’t eat, then he’d just have to find more of it.

And so Taipalus and his mother, Amber Melke-Peters, started by recycling cans and bottles to raise money for meals. It wasn’t long before neighbors saw their efforts and offered to help. Soon enough, messages and money poured in from around the globe.

In response, Taipalus and his mom rolled out the ‘Pay it Forward: No Kid Goes Hungry’ initiative on the site FundRazr.com. Incredibly, it was such a success, they were soon able to pay off the overdue lunch debts for all the students at Challenger Elementary.

But it turns out that was just the entrée. The site blew up, raising over $40,000 with donations coming from Denmark to Hong Kong. In an update, Cayden’s mom posted that they were able to pay for over 5,000 lunches for all Hartland County Community schools.

Donors were awestruck at the amazing 8-year-old.

“You are an amazing young man, keep up the good work Cayden, we need more people in the world like you, god bless you & your family, this touched my heart so much, Ty Cayden for such a job well done!!!!,” glowed one.

Cayden personally delivers the money to each school before going to class in the morning.

The school responded that students who cannot afford lunch are served a ‘reduced’ lunch. However, Cayden’s mother said that “The idea is to remove the negative stigma,” so students can order what they’d like.

An Impact That Continues Rippling

If you’re keeping count, that’s one amazing kid, over 5,000 lunches and one very proud mother.

According to schoolnutrition.org, one in seven, or 11 million, children in America live in households without consistent access to adequate food. As well, a full stomach equals much stronger grades. Stronger grades mean better opportunities, which means a better future for our kids.

One boy didn’t need a bunch of fancy stats to act. Seeing a hungry friend turned away was motivation enough for him to do something and just look how it turned out.

We should all tap into our inner Cayden and not accept even one student going hungry. Just imagine how bright the future would be.