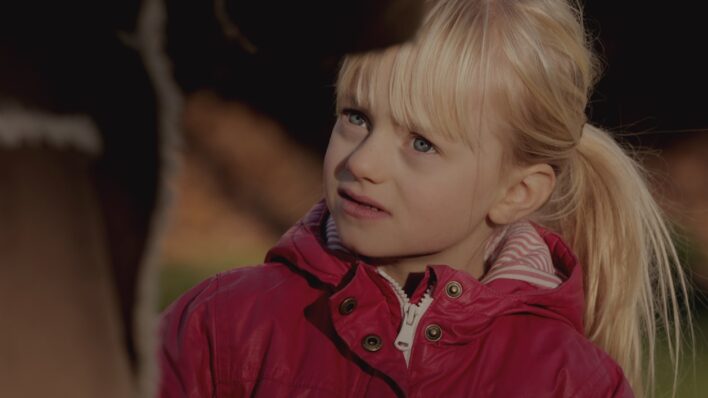 At just six years old, Maisie Sly has earned her first acting credit in the Oscar-nominated “The Silent Child” movie.

At just six years old, Maisie Sly has earned her first acting credit in the Oscar-nominated “The Silent Child” movie. The short film has taken the festival circuit by storm, racking up 15 wins to date, including the Rhode Island International Film Festival’s Best Actress and Best Acting Award for Maisie’s incredible performance.

I wanted to show people that deaf children can do anything

Written by former Hollyoaks star Rachel Shenton, “The Silent Child” tells the story of Libby, a profoundly deaf four-year-old girl living a life of silence and isolation in rural England. The little girl meets a social worker who teaches her sign language, giving her the gift of communication.

100 children auditioned for the role of Libby, but Shenton and director Chris Overton knew within minutes that Maisie was the right fit. Born profoundly deaf and fluent in sign language, Maisie brought a precocious understanding of Libby’s experiences and those of many people with deafness to the role. Maisie’s family moved not long before the casting, relocating 160 miles to allow Maisie to attend a school with support services for children with deafness.

Shockingly, over 78% of deaf children attend mainstream schools with no specialized support in place. This is heavily reflected in their grades, as well as their mental health and wellbeing.

As 90% of deaf children are born to hearing parents, communication becomes a major barrier from the start. Known as one of the loneliest disabilities, deafness can bring crushing isolation to those affected –- a tragedy Shenton witnessed first-hand. Her father lived with deafness in his last two years, a side-effect of cancer treatments. The experience inspired Shenton to write the critically-acclaimed movie.

I witnessed my superhero dad for the first time seem vulnerable and I noticed how easy it was for people to leave him out.

But “The Silent Child” is more than just a personal story for Shenton, or a breakout role for Maisie. Both, along with Overton, consider the film a potential vehicle for change, and are hoping to raise awareness and expand the services available to people with deafness. One of their goals is to get British Sign Language taught in schools.